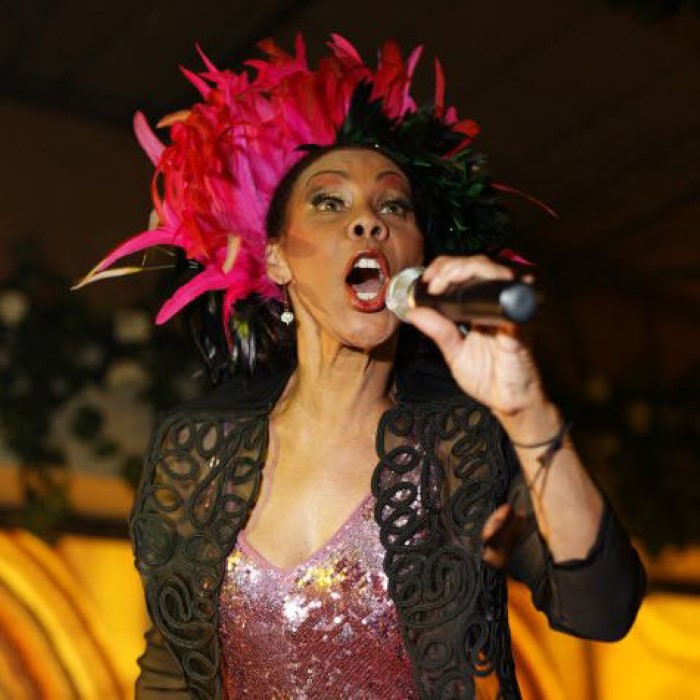 Hip cats who've been bopping to acid jazz, sipping to bossa lounge, swaying their organic groove thangs to world-inflected dance music have already been dazzled by Parisian-based Brazilian chanteuse Salomé de Bahia. And chances are if you are one of the lucky who know of her, it's via the international club hit, "Outro Lugar"--her glorious Brazilian cover of Stevie Wonder's "Another Star". This and fourteen other songs make up "Brasil," the sunny, celebratory North American (Yellow Productions Recordings/Tommy Boy Entertainent) debut album by Salomé de Bahia. Brasil" is a cachaza-kissed carnival of bossa nova, samba, salsa, mambo and contemporary club music. Brazilian classics "Fio Maravilha," "Lanca Perfume" "Voce Abuso" "Pais Tropical," "Fiesta Para Um Rei Negro" and "Brigitte Bardot" mix beautifully with house-infused club tracks like "Taj Mahal," "Outro Lugar," (Tony Moran remixes to be released this summer) "Cada Vez" and "Copacabana" (yes, that "Copa-cabana," but in Portugese!). Though not a live album, Salomé adds her own personal touch, dropping in brief comments ("Music is my life!") or a rousing intro to the next song ("Do you feel alright?!") Although France is officially celebrating "The Year of Brazil" from March through December of 2005 (and what better time to release "Brasil"?) Parisian producer Bob Sinclar (and his label Yellow Productions) fell in love with Salomé de Bahia over eleven years ago when he discovered her singing at Chez Felix, a famous Parisian jazz cabaret. (For over ten years she was the star of "Brazil Tropical"--a review led by bandleader Edvaldo Carneiro--a show which featured forty musicians, singers and dancers performing music rooted in the Bahia region of Brazil.) Salomé was perfect for--and soon featured on--"Psychodelico" the first album by Sinclar-produced Brazilian-influenced acid jazz group, The Reminiscence Quartet. The collective toured the international acid jazz scene, opening for Brooklyn Funk Essentials' first Parisian show, appearing at the Jazz Bop festival in Brighton (with Giles Peterson) and performing with jazz legend Tania Maria. Additional productions followed including an early version of "Outro Lugar," exotic club single "Tormento de Amor" (on the first "Africanism" album) and her first album to be produced by Bob Sinclar, "Cabaret." Last year Salomé recorded a cover of "Taj Mahal," originally written by longtime Brazilian music star, Jorge Ben. The song, which appears on "Brasil," is a personal favorite, as it reminds her of the neighborhood of her youth, Salvador in Bahia, where she first began making records in 1958. One look at the gowns, the feathered headdresses, the wise smile and reflexively the diva label pops up. But to call Salome de Bahia a diva is to sell short a woman who's voice, joy, and passion radiate so much more. Sure to be a hit at any summer party, bring it like a caipirinha: pop in a little Salomé in your player and take 'em to "Brasil!"