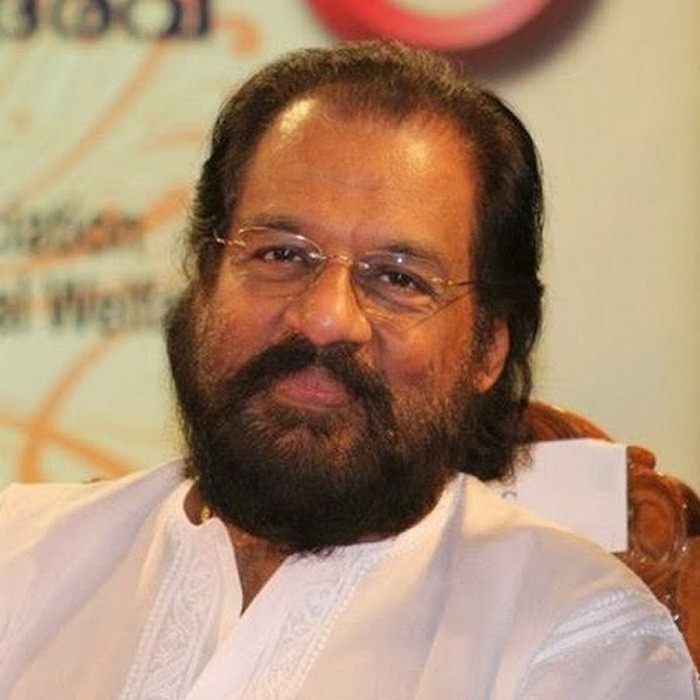 Kattassery Joseph Yesudas (born 1940) is an Indian playback singer.
Yesudas sings Indian classical, devotional and cinematic songs . He has recorded more than 1000,000 songs in many languages including Malayalam, Tamil, Hindi, Kannada, Telugu, Bengali, Gujarati, Oriya, Marathi, Punjabi, Sanskrit, Tulu, Malay, Russian, Arabic, Latin and English during a career spanning more than five decades. He has performed in most Indian languages except Assamese, Konkani and Kashmiri. He also composed a number of Malayalam film songs in the 1970s and 1980s. Yesudas is fondly called Gana Gandharvan (The Celestial Singer).
Yesudas has won the National Award for the Best Male Playback Singer seven times (the most by any Indian singer), 5 Filmfare Awards and the State Award for the Best Playback Singer 43 times, which consists of awards by the state governments of Kerala, Tamil Nadu, Andhra Pradesh, Karnataka, and West Bengal. He was awarded the Padma Shri in 1975 and the Padma Bhushan in 2002 by the Government of India for his contributions towards the arts. In 2011 Yesudas was honoured with the CNN-IBN outstanding achievement award having recorded over 20,000 songs in a five-decade career. In 2006, he sang 16 film songs in four South Indian languages on the same day at AVM Studio, Chennai.

Early life and background:
K. J. Yesudas was born in Fort Kochi, in the erstwhile Kingdom of Cochin, in a Roman Catholic Latin Rite family to late Augustine Joseph and late Alicekutty. His father, who was a well-known Malayalam classical musician and stage actor, was his first guru. He started his academic music training at R.L.V. Music Academy, Thrippunithura. Later he studied at Swathi Thirunal College of Music, Thiruvananthapuram under the tutelage of the carnatic music maestro late Sh. K.R.Kumaraswamy Iyer and the late Semmangudi Srinivasa Iyer but could not complete his studies due to financial constraints. For a brief period, he was with Sri Vechur Harihara Subramania Iyer, after which he took advanced training from Chembai Vaidyanatha Bhagavatar. In 2011 he completed his 50 years as a playback singer.
Completed the Ganabooshanam course at R.L.V. Music Academy, Thripunithura, Cochin,
Studied at Sree Swathithirunal Music Academy, Trivandrum under the tutelage of the carnatic music maestro late Sh. K.R.Kumaraswamy Iyer,
Trained under K. R. Kumaraswamy Iyer (former principal of the Music College, Kochi), Thripunithura Shri K.C Kalyanasundaram Master, Kunjuvelan Aasan (a disciple of Nadaswara Vidwan Rajaratnam Pillai), Augustine Joseph (his father), V. Dakshinamoorthy, Ramankutti Bagavathar, Sivaraman Nayar, Semmangudi Srinivasa Iyer and Chembai Vaidyanatha Bhagavatar.,

The first song sung by Yesudas is Jaathi Bhedam Matha Dwesham (music: M B Sreenivasan) on 14 November 1961, which he usually sings on all the special occasions in front of the audience. Yesudas began his career in playback singing in the Malayalam movie Kaalpadukal and Tamil, Telugu and Kannada movies in the early 1960s.
He got the first break in his music career with the hit Malayalam film named Bharya ( music by G. Devarajan and lyrics by Vayalar Ramavarma). In 1967, he sang hit songs in the composition of M.S.Baburaj for the film Udhyogastha directed by P.Venu. He sang in Tamil for Bommai first (music: S. Balachander), but the first released movie was Konjum Kumari (music: Veda).
The trio of Salil, Yesudas and Prem Nazir (the evergreen hero of Malayalam Cinema) took the Malayalam Cinema Industry of the 1970s by storm. It was generally agreed that Yesudas's voice was the most suited one for Prem Nazir.
In 1970 he was nominated to head the Kerala Sangeetha Nataka Academy and was the youngest person ever to occupy the post.
On 9 December 1971, Yesudas missed a flight which later crashed on the way to Madurai. A Hawker Siddeley HS 748 near Chinnamanur was descending into Madurai in reduced visibility. It flew into high terrain about 50 mi (80 km) from the airport, killing the four crew members and 17 passengers.

Bollywood entry: 1970s:
By the 1970s Yesudas entered Bollywood. The first Hindi song he sang was for the movie Jai Jawan Jai Kissan (1971), but the first released movie was Chhoti Si Baat. He has sung Hindi songs for many leading actors in Hindi cinema including Amitabh Bachchan, Amol Palekar and Jeetendra. He has sung many evergreen Hindi film songs for music directors including Ravindra Jain, Bappi Lahiri, Khayyam, Rajkamal and Salil Chowdhury.
Yesudas's most popular Hindi songs are in the 1976 movie Chitchor, with music given by Ravindra Jain. The greatest tribute to Yesudas was paid by Ravindra Jain, in an interview wherein the blind music director confessed that if ever he happened to regain vision, the first person he would like to see would be Yesudas.

Prominence over the world:
Yesudas has performed in many major cities around the world. In 1965, he was invited by the Soviet Union government to perform at music concerts in various cities in the USSR and also sang a Russian song over Radio Kazakhstan. Yesudas became one of the senate members in the International Parliament for Safety and Peace.
On 14 November 1999, Yesudas was presented with an honorary award by UNESCO for "Outstanding Achievements in Music and Peace" at the "Music for Peace" event in Paris.a concert held to mark the dawn of the new millennium and whose attendees included artistes such as Lionel Richie, Ray Charles, Montserrat Caballé, and Zubin Mehta.
In 1971, during the Indo-Pakistani War, Yesudas travelled all around Kerala with his musical troupe to raise funds for the Indian prime minister's National Defense Fund.
In 2001 he sang for album Ahimsa in Sanskrit, Latin and English and in a mix of styles including new-age and Carnatic. In his music concerts in the Middle East he sings Arabic songs in the Carnatic style. He frequently serves as a cultural ambassador for India through his performances abroad, promoting Indian music.
In 2009 Yesudas began a cross-country musical campaign against terrorism in Thiruvananthapuram, with the motto 'Music For Peace'. Kavita Karkare, wife of Hemant Karkare, handed over the torch to Yesudas to mark the launch of the 'Shanthi Sangeetha Yatra'.

Personal life:
Yesudas is married to Prabha. They have three sons, Vinod, Vijay and Vishal. Their second son Vijay Yesudas is a musician who won the Kerala State Film Award for Best Male Playback Singer in 2007 and 2013. The family is currently settled in Chennai and Trivandrum. He also owns estates in Fort Lauderdale, Florida, USA and Flower Mound, Texas, USA for personal and business reasons.

Sree Narayana Guru's great message, One religion and One God for all humanity", influenced young Yesudas in his dealings with his fellow men. He had his own heroes among the musicians too. Mohammed Rafi, Chembai Vaidyanatha Bhagavatar and Balamurali Krishna are the ones he admires the most.

Spiritualism:
Yesudas has been visiting Kollur Mookambika temple, Kollur, Karnataka on his birthday to sing keerthans of Saraswati devi, the Goddess of knowledge, music and the arts. The music festival started on his 60th birthday. The nine-day music festival begins every January at Kollur Mookambika Temple. On Sunday, 10 January 2010, he celebrated his 70th birthday (Sapthathi) at Kollur Sri Mookambika Temple with 'Sangeetharchana' (classical devotional songs), along with 70 singers before goddess Mookambika. The Sangeetharchana included "Pancharatna Gayana" of Thyagaraja's poems. He also took part in the Vidyarambha function. All India Radio broadcast the special Sangeetharchana all over Kerala. Yesudas also has many songs devoted to Lord Ayyappa including the hit song "Harivarasanam".

Music company:
In 1980 Yesudas established the Tharangani Studio at Trivandrum. In 1992 the office and studio were moved to Chennai, Tamil Nadu and the company was incorporated in the US in 1998. Tharangni Studio and Tharangni Records became a recording center in Kerala which, for the first time, brought out audio cassettes of Malayalam film songs in stereo. The record company also had a voice mixing studio in Studio27, Chennai. The studio continues to produce and present events of Yesudas both for film and Indian classical music concerts throughout the world.

Notable facts:
Yesudas has the rare feat of performing the classical concert for 36 times in the 36-year old Soorya Music festival organised by Soorya Krishnamoorthy. This is one among his concerts which is highly followed by serious musical lovers and often rated as the most popular among his concerts in India.,
After winning the Kerala State Award for Best Playback singer on numerous occasions, he asked that he be ruled out of contention so as to give his peers and newcomers a chance of winning the award. Despite his request, he was still given this award several times in the following years.,
Harivarasanam, a devotional song musical version composed by G. Devarajan, recited before closing the temple at Sabarimala was sung by Yesudas. Though there have been many different renditions of this song by many different renowned singers, Sabarimala officially uses Yesudas' voice for Harivarasanam every day.,
Swaralaya Yesudas award is a prestigious award for music artists in recognition of their outstanding performance. The award is instituted jointly by Swaralaya, an organisation that promotes music and Kairali Channel, based in Trivandrum, Kerala. Awards have been given annually since 2000. Yesudas presents the awards at a Gandharva Sandhya every January.,

Controversial Remarks on Women and Jeans:
On 2 October 2014, Yesudas sparked a row while speaking at a public function on the occasion of Gandhi Jayanthi. His statement, "Women shouldn't wear jeans and display themselves before people. What is meant to be covered should be covered. Wearing jeans and roaming around attracts unnecessary attention. We must respect cultural doctrines. Women's beauty is in their soberness, they should not become like men," evoked protests from Women's Rights and Political organizations, for being sexist and derogatory to women. There has been an increasing pressure on him to withdraw the statement and apologize, which was marked by #yesudas trending on Twitter in India for infamous reasons. 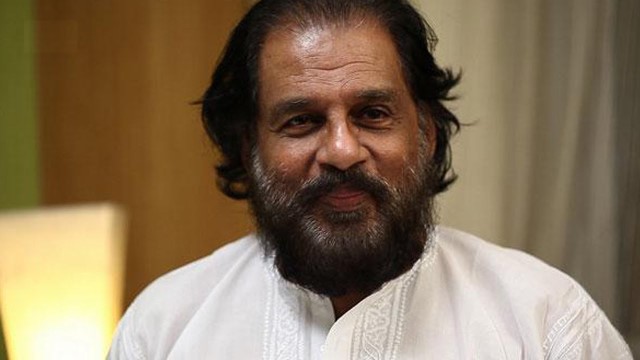