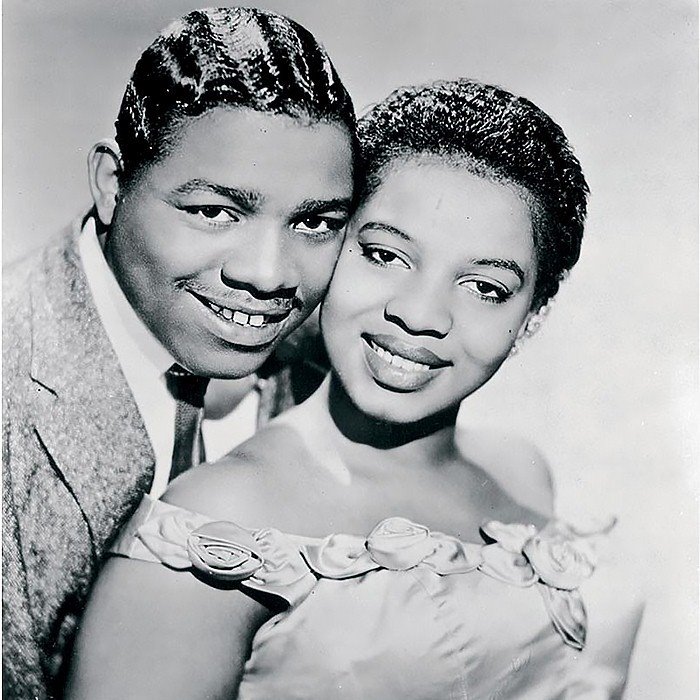 This New Orleans-based duo comprised Shirley Goodman (b. 19th June 1936, New Orleans, Louisiana, U.S.A. d. 5th July 2005, Cedar Sinai Hospital, Los Angeles, California, U.S.A.) and Leonard Lee (b. 29th June 1936, d. 23rd October 1976). After singing in church choirs, Shirley recorded her first demo with a group of friends in 1950. Some months later, her solo voice caught the attention of Aladdin Records owner Eddie Messner, who tracked her down and paired her as a duo with a school friend, Leonard Lee. As "Shirley & Lee," they recorded their debut single "I'm Gone," produced by Cosimo Matassa, which reached #2 on the Billboard R&B charts in 1952. The record contrasted Goodman's soprano with Leonard's baritone, in a way in which subsequent songwriters have suggested was influential on the development of ska and reggae. In their early songs, they pretended as if they were sweethearts and were dubbed "the Sweethearts of the Blues." However, they changed style in 1956 and recorded "Let the Good Times Roll," which became their biggest hit reaching #1 on the R&B chart and #20 on the Billboard Hot 100 chart. Although the follow-up, "Feel So Good" also made the charts, the duo's later releases were less successful, and Goodman and Leonard split up in 1962. Leonard made some subsequent solo records with little success. In the mid 1960s, Shirley Goodman moved to California, where she worked as a session singer on records by Sonny and Cher, Dr. John and others, and also formed a duo for a time with Jessie Hill. She sang backing vocals on The Rolling Stones' Exile On Main Street album, but then briefly retired from the music industry. Later in 1974, as Shirley Goodman Pixley, she was contacted by her friend Sylvia Robinson, previously of the duo Mickey and Sylvia and now co-owner of the All Platinum record label, and was persuaded to record the lead vocal on a dance track, "Shame, Shame, Shame." Credited to Shirley & Company, the record became an international pop hit, reaching #12 on the Billboard chart and presaging the disco boom. After a few further recordings and tours, Goodman finally retired from the music industry after returning to New Orleans in the late 1970s.