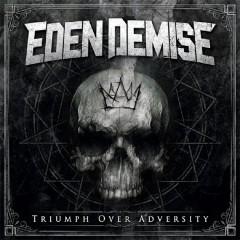 Eden Demise is a five-piece heavy hardcore band from Athens, Greece. Formed in late 2004, they deliver an aggressive, straight in your face metallic hardcore, full of crushing riffs, street grooves and devastating breakdowns. With influences from NYHC to the most dark and heavy European style, they manage to create a tight, raging sound, but in the same time personal, and full of attitude. The brutal, hatefull vocals fit perfect with the hip hop influenced parts, spitting tales of pride and vengeance as long as some socio-politically focused lyrics. Their music reflects their hard work, dedication and true love for hardcore, not only as a music genre but as a way of life, as well. “I have no doubt the band placed themselves among the best metallic type of hardcore bands in Europe right now.” –Hard Boiled hardcore webzine.

In 2007, Eden Demise, self-released their first work, "Scars of a shattered world" EP, a representative sample of their sound that got great feedback. Next year, they signed with On The Attack records(USA) and in 2009 they released the 9track full length album, "The Takeover".

In the five years of their existence, they have shared the stage with great hardcore and metal acts like Sepultura, Stampin' Ground, Born From Pain, Arch Enemy, Heaven Shall Burn, Maroon, Pro Pain, Romeo Must Die, Settle The Score, No Turning Back, Redound, Last Hope, and they have played numerous times inside and outside their country, like their show in London with Knuckledust and Ninebar and their appearance in Rockwave, the biggest Greek metal/rock festival with bands like Slipknot, Mastodon, Down, Kylesa and Torch. 2010 finds Eden Demise stronger than ever, working on new material, and planning to hit the road!