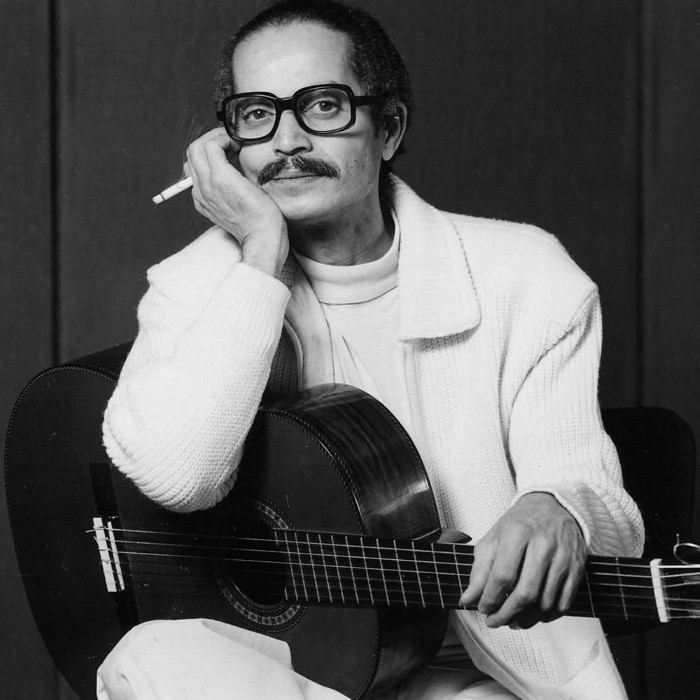 Baden Powell de Aquino (August 6, 1937 – September 26, 2000) usually known simply as Baden Powell, was one of the most prominent and celebrated Brazilian guitarists of his time. He explored the instrument to its utmost limits, playing it in a distinctive, unique manner, incorporating virtuoso classical techniques together with popular harmony and swing. He performed in many styles, including bossa nova, samba, Brazilian jazz, Latin jazz and música popular brasileira. He performed on stage during most of his lifetime, and recorded an extensive discography composed of LP and CD albums produced in Brazil and Europe, particularly in France and Germany.

Baden Powell de Aquino was born in Varre-Sai in the state of Rio de Janeiro, Brazil. His father, a scouting enthusiast, named him after Robert Baden-Powell. When he was three months old, his family relocated to the Rio suburb of São Cristóvão. The new surroundings proved profoundly influential. His house was a stop for popular musicians during his formative years. He started guitar lessons with Jayme Florence, a famous choro guitarist in the 1940s. He soon proved a young virtuoso, having won many talent competitions before he was a teenager. At age fifteen, he was already playing professionally, accompanying singers and bands in various styles. As a youngster, he was fascinated by swing and jazz, but his main influences were firmly rooted in the Brazilian guitar canon.

In 1955, Powell was playing with the Steve Bernard Orquestra at the Boite Plaza, a nightclub within the Plaza Hotel in Rio, where his skill got the attention of the jazz trio playing across the lobby at the Plaza Bar. When Ed Lincoln needed to form a new trio, he asked Powell to join on guitar to become the Hotel Plaza Trio. Powell brought in Luiz Marinho for bass duties as well as a fourth member of the "trio": Claudette Soares on vocals. Powell, Lincoln and their young musician friends took part in after-hours jam sessions, gaining notice in the growing Brazilian jazz scene.

Powell achieved much wider fame in 1959 by convincing Billy Blanco, an established singer and songwriter, to put lyrics to one of Powell's compositions. The result was called "Samba Triste" and quickly became very successful. It has been covered by many artists, including Stan Getz and Charlie Byrd in their seminal LP Jazz Samba.

In 1962, Powell met the poet-diplomat Vinicius de Moraes and began a collaboration that yielded some true classics of 1960s Brazilian music. Although bossa nova was the prevailing sound of the times, the partnership Baden-Vinicius wanted to transcend the then-fashionable sound by syncretizing Afro-Brazilian forms such as Candomblé, Umbanda and Capoeira with Rio de Janeiro's Samba forms. The most enduring result is a series released as an LP in 1966 under the name "Os Afro-Sambas de Baden e Vinicius". During those years, he studied advanced harmony with Moacir Santos, released recordings in the Brazilian labels Elenco and Forma, as well as in the French label Barclay and the German label MPS/Saba (notably, his 1966 Tristeza on Guitar, considered by many to be a high point in his career). In addition, he was the house guitarist for Elenco, and of the celebrated singer Elis Regina's TV show "O Fino da Bossa".

In 1968, he partnered with poet Paulo Cesar Pinheiro and produced another series of Afro-Brazilian inspired music released in 1970 as "Os Cantores da Lapinha".

He visited and toured Europe frequently in the 1960s, relocating permanently to France in 1968. In the 1970s, he released many recordings with different labels in Europe and Brazil. His star dimmed somewhat owing to health problems and people's changing tastes. He spent the 1980s in semi-retirement in France and Germany. Finally, in the 1990s he and his family moved back to Brazil, where he continued to record and perform. Public recognition of his work came around that time in Brazil. By the end of the 1990s he converted to the Evangelical faith, to which he credits overcoming his long addictions to alcohol and tobacco. Nevertheless, his health had greatly deteriorated after many years of abuse, and he fell terminally ill in 2000.


Baden Powell decided at age 19 to stop playing the electric guitar, preferring to concentrate on the classical guitar for the rest of his career. He did record a series of albums with a borrowed steel-string acoustic, but that is as far as he strayed from his main instrument in his adulthood.

An analysis of his repertoire reveals a wide range of interests. It spanned all the idioms of Brazilian popular music of the 20th century: Samba, Bossa Nova, Afro-bahian ritual music, Frevo, Choro, North Eastern Sertão music, even European and Japanese lullabies. Like most musicians growing up in the 1940s and 1950s, he was deeply influenced by Jazz, especially Bebop and Swing. He covered Thelonious Monk's 'Round Midnight on two recordings, and Jerome Kern's All the Things you Are on three occasions (including his first solo album).

This upbringing is reflected in his playing style, which shows a fusion of jazz harmonies and classical guitar technique, with a very Brazilian right hand (i.e., the one carrying the rhythm on the guitar). In solo classical music, he was quite proficient in the works of Tárrega and Bach. When playing in a group, he was able to accompany singers with quiet mastery, or let loose and play street Samba in sloppy "party" style as if the guitar was another percussion instrument. Like Monk, he was fond of the minor second interval as a way to "bend" the tonality. However, because of his jazz background, he would rarely physically bend the string, preferring instead to play the minor second using an adjacent open string. Students of his style should note this preference for chord voicings that feature extensions on the open strings as a way of punctuating passages. Other idioms to watch for are the endless variations in rhythm played by the right hand; always within the proper 2/4 samba meter, as well as his tendency to put his "signature" in a fast descending scale with a (slower) ascending arpeggio in the relative key. Another common device that he used in his recordings consisted of his use of vocalise and scat singing, often in unison with the melody line (especially when the melody was sung on the bass strings of the guitar). 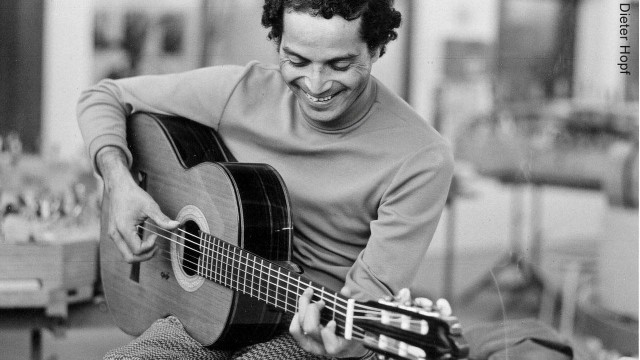