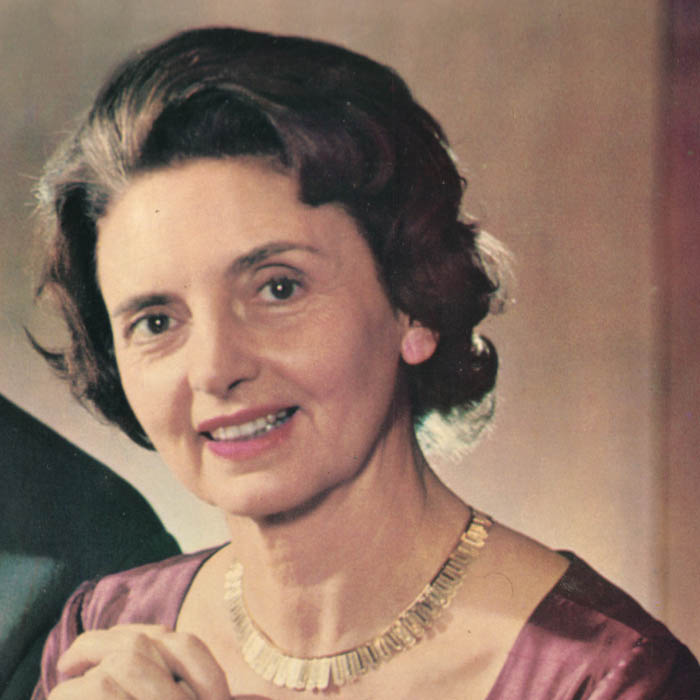 Gaby Casadesus (August 9, 1901 - November 12, 1999) was a French classical pianist and teacher born in Marseilles, France. She was married to the famous French pianist Robert Casadesus, and their son Jean Casadesus was also a notable pianist.
Born Gaby l'Hôte, she studied at the Paris Conservatory with Louis Diémer and Marguerite Long and was awarded the first prize in piano at the age of 16. She met Claude Debussy at this time, as he was the judge for one of her competitions. She was also friendly with Debussy's daughter Claude-Emma who died soon after of diphtheria. Gaby later won the Prix Pagès, which was the most prestigious award in France at the time for which women were eligible.
In 1921 she married the pianist Robert Casadesus, with whom she founded the Robert and Gaby Casadesus duo. The duo made many recordings of the four-hand piano repertoire. However, Gaby was also a significant soloist. She knew Maurice Ravel, Gabriel Fauré, Florent Schmitt and Moritz Moszkowski, and her interpretations were aided by their guidance. Her repertoire also included Felix Mendelssohn, whose music she effectively championed, and the keyboard composers of the Baroque era.
As a teacher, Gaby Casadesus taught in the US, at the Salzburg Mozarteum, at the Académie Maurice Ravel in Saint-Jean de Luz and at the American Conservatoire at Fontainebleau. Among her notable pupils are Donna Amato, David Deveau, Rudy Toth, and Vladimir Valjarević. Together with Grant Johannesen and Odette Valabrègue Wurtzburger, Gaby Casadesus co-founded the Robert Casadesus International Piano Competition, which is based in Cleveland, Ohio.