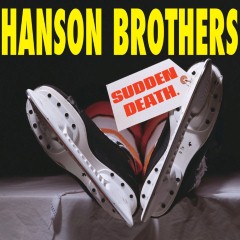 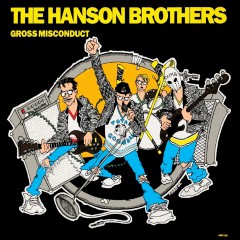 Hanson Brothers are a side-project created by Robby Hanson (Rob Wright) and Johnny Hanson (John Wright) with Tommy Hanson (Tom Holliston) - all members of the legendary Canadian band NoMeansNo, but with John Wright on vocal duties in stead of drums). They took their name from characters in the 1977 George Roy Hill film Slap Shot starring Paul Newman. Kenny Hanson (Ken Jensen) of D.O.A. was their original touring drummer, but he died in a house fire in 1995. Kenny Hanson II (Ken Kempster) of Showbusiness Giants became their drummer for subsequent tours. Currently, Mikey Hanson (Mike Branum) serves as the band's touring drummer. Their songs, performed in a Ramones style, focus mainly on beer, ice hockey and girls. The inspiration is most obviously heard in 'Blitzkrieg hops'. As usual No Means No show a great sense of humour by also covering themselves. The song 'Brat' (only available on 7") is based on their own 'Dad'. While the latter has extremely serious lyrics about incest, the former is about a brother always picking toys. Originally started as a humorous side project, the band have since released three full-length albums as well as several singles. Hanson Brothers have toured almost as extensively as their alter egos Nomeansno (sometimes even opening up for themselves at performances) playing their unique blend of melodic, uptempo, raw punk rock everywhere from Calgary, San Francisco and London to Nova Gorica and Copenhagen. In 2000, four of the band's songs were featured in the NHL Rock The Rink game for the Sony PlayStation.