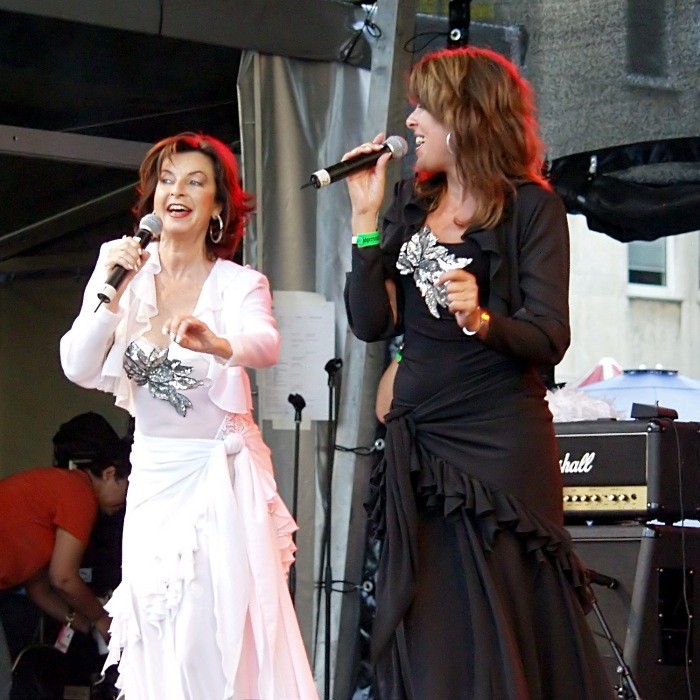 Baccara was a female vocal duo formed in 1977 by Spanish artists Mayte Mateos (7 February 1951, Logroño) and María Mendiola (4 April 1952, Madrid). The pair rapidly achieved international success with their debut single "Yes Sir, I Can Boogie", which reached number one across much of Europe and is one of the best-selling singles of all time. A successful follow-up single ("Sorry, I'm a Lady") and European tour led to a number of album releases, numerous television appearances and the duo's selection to represent Luxembourg in the Eurovision Song Contest 1978.

Despite a substantial following in Spain, Germany and Japan, by 1981 the duo's distinctive blend of disco, pop and Spanish folk music was no longer fashionable, and by 1983 Mayte Mateos and María Mendiola were both working on solo projects. Achieving little success as solo artists, the two formed duos of their own: separate incarnations of the original Baccara appeared during the middle of the decade, with Mendiola fronting New Baccara and Mateos keeping the duo's original name. During the 1990s New Baccara was renamed back to Baccara; as a consequence both Mateos and Mendiola now head different duos with the same name. Both principals have subsequently had prolonged but separate legacy careers based on nostalgia and their earlier fame.

Mendiola's Baccara has seen more international recognition, releasing a string of Hi-NRG club hits such as "Fantasy Boy" and "Touch Me" in the late 1980s and the later UK club hit "Wind Beneath My Wings". Mateos' Baccara has released few new recordings, but has remained in demand for television and live appearances in countries such as Spain and Germany where the original Baccara developed a loyal fan base, performing the duo's back-catalogue and modernised versions of traditional Spanish songs.