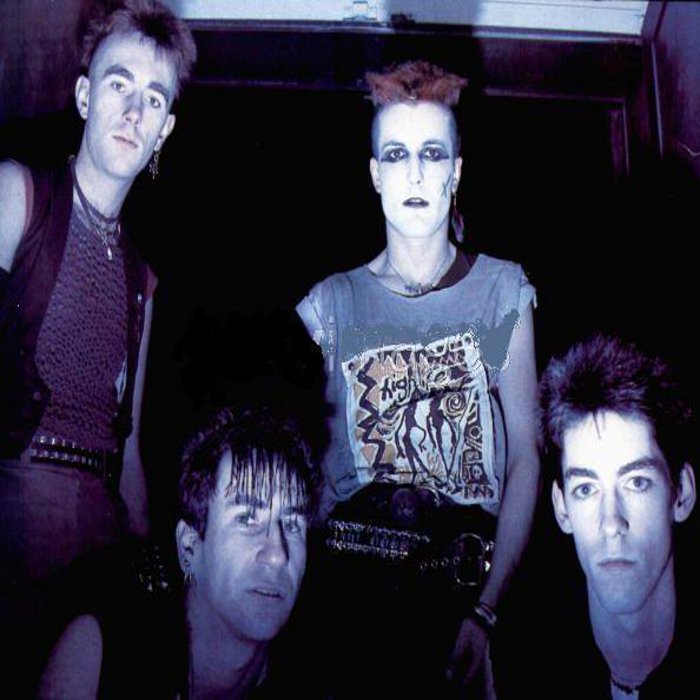 Sex Gang Children are an early gothic rock and post-punk band that formed in the early 1980s in England. Although the original group only released one official studio album, their singles and various other tracks have been packaged into numerous collections, and they remain one of the more well-known bands of the early Batcave scene and have reformed for new albums and touring at various times since the early 1990s.
The original lineup was Andi Sex Gang (vocals, guitar), Dave Roberts (bass), Terry McLeay (guitar), and Rob Stroud (drums). They were a very dramatic band, relying on heavy bass, tribal drumming, sudden mood shifts, a woozy cabaret sound (influencing the rise of the later dark cabaret scene), and yet another in a long line of goth singers with an odd, highly dramatic voice. The band's first release was a cassette-only live album, Naked, in 1982. The Beasts EP, their first vinyl release, followed the same year after they signed to the Illuminated label. The band's only studio album from their original period together, Song and Legend, was released in 1983, reaching the top of the UK Indie Chart and spawning the single "Sebastiane". Stroud departed to form Aemoti Crii, to be replaced by former Theatre of Hate drummer Nigel Preston, who played on the band's next single, "Mauritia Mayer", before himself being replaced by former Death Cult drummer Ray Mondo. Roberts left in late 1983 to form Carcrash International, and the lineup settled to Andi, McLeay, Cam Campbell (bass) and Kevin Matthews (drums), a change forced by Ray Mondo's deportation to his native Sierra Leone.

Following McLeay's departure in 1984, the band was renamed Andi Sex Gang & the Quick Gas Gang for the 1985 Blind! album and tour (McLeay did not leave until after that album's recording, however), but split afterwards. Renewed interest in the band in the United States led to a reformation in 1991, and a new album, Medea, in 1993. As a solo artist Andi went on to make a number of well-received albums for various labels.
Sex Gang Children were originally called Panic Button. The name "Sex Gang Children" was taken by Malcolm McLaren from a William Burroughs novel as a possible name for the band that became Bow Wow Wow and was one of the names that Boy George went through before choosing "Culture Club". SGC vocalist Andi Sex Gang tried to persuade George to use the name, but when Culture Club drummer Jon Moss passed on the idea, Andi decided that the name should not go to waste.