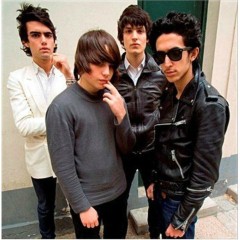 Naast was formed in Joinville-le-Pont in 2004. The band originally comprised of just two members, neighbors Gustave (guitar and vocals) and Nicolas (drums). Their first concert was played in a pub, as a support act before The Parisians played. Interest from Paris then began to be grow in the group. In 2005 Nicolas and Gustave were joined by Clod (bass guitar, keyboard) and Lucas, known as Laka (guitar). Their concerts began to attract more and more fans, but they also received criticism from various groups. Still, Naast has enthusiastic support from magazines and individuals alike. Magazines Rock&Folk, (in particular journalist Philippe Manoeuvre and Les Inrockuptibles, have stood by them in the past. The group continued to develop further, taking inspiration from some of their idols by all adopting the Naast patronym (despite not actually being related). This follows in the footsteps of bands like The Ramones or The White Stripes. The master track of Mauvais Garçon appears in the Playstation 2, Playstation 3, Xbox 360, and Wii game guitar hero 3: Legends of Rock as a bonus track.