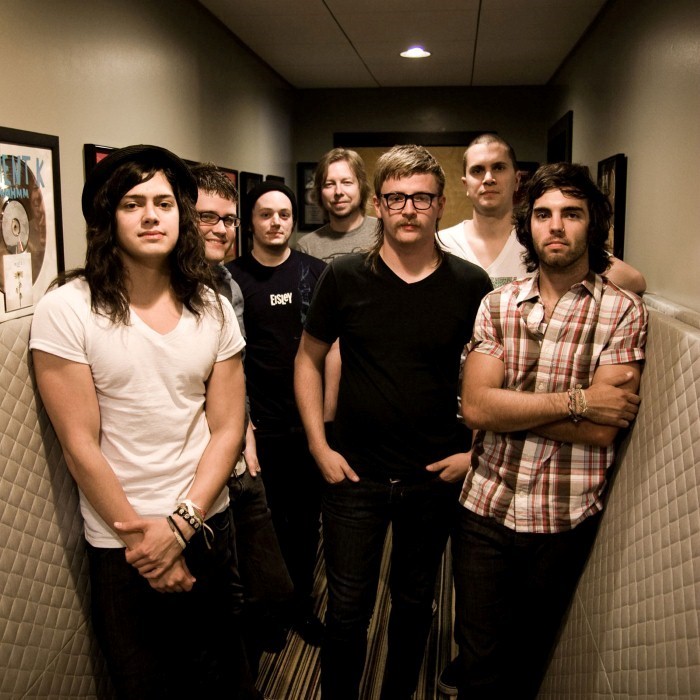 Abandon Kansas is a four piece indie rock outfit from Wichita, Kansas. Jeremy Spring - Vocals and Guitar Brian Scheideman - Drums and Backing Tracks Brad Foster - Guitar and Michael Jackson Moves Chet Kueffer - Bass This band is known for putting on a relentlessly energetic show and has been winning over crowds in over 35 states with their catchy indie dance songs for the last two years. From San Diego to Seattle, Pensacola to Minneapolis, the love for Abandon Kansas is spreading, and it's spreading fast. With influences in the direction of The Killers, Jonezetta and Muse, musically mixed with the creativity and passion of bands we all love like Mute Math and Copeland, it's no wonder the word is traveling so quickly. Their new acoustic EP "The Earth Falls Asleep" is the wildly satisfying follow up to their 2008 full length release "You Build A Wall, I'll Build A Ladder," and is getting a lot of buzz with both fans and those in the industry. Abandon Kansas is four guys with a heart for music and a passion for people. In the Spring of 2009 Abandon Kansas signed with Gotee Records owned by known Christian Rapper TobyMac. Frontman Jeremy Spring said, "Signing with Gotee let us stay being a band who travels to the small venues and lets us do our own thing, and gives us the freedom between playing "Secular" and "Christian" music." In September of 2009 the band released a 6 song EP entitled "We're All Going Somewhere" under Gotee Records. The band also spent time in the fall to record their rendition of "O Come, All Ye Faithful", which was released to iTunes and other music sites. In June of 2010, the band went back in with Producer Mark Townsend (O.C. Supertones, The Wedding, House of Heroes Relient K) and finished up a full length album to be released at a later date. At the beginning of February 2011, AK started promotion for their new album. To kick things off they released "The Golden State - Single" EP on iTunes that featured the upcoming song "The Golden State", as well as a acoustic version of "Close Your Eyes" featuring fellow Gotee artist Stephanie Smith. The single also featured the video shot and directed by Tim Dodd, which shows Jeremy making his way throughout Hollywood and the surrounding area. Dodd had also shot the video for "I Wonder If It's Me" while on the road with the band in 2010. In March of 2011, the band with new bassist Chet Kueffer released their second full length album entitled "Ad Astra Per Aspera", which is the Kansas state motto (Latin of Virgil: To the Stars With Difficulties). The album features 11 songs, featuring a remake of "Minutes" from You Build a Wall, I'll Build a Ladder entitled "Liar". The album features a more matured AK. Jeremy's smooth, and developed voice in front of a well rounded group of layers. The lead lines Brad and Mark helped lay down are melodic, and tasty. Chet provides a new punchy and deep bass sound to the band, and Brian rounds out the group with a wide variety including Dance/Disco beats, to a more relaxed Rock. The band released "The Golden State" as the single. With "Heaven Come My Way" and "A Conversation With The Sky" as the next two. Their mission is to offer a music scene that is over-saturated with hardcore some genuine songs that cut to the core of who we are. Instead of break downs, it a dance party and everyone is invited. They have shared the stage with The Red Jumpsuit Apparatus, As Cities Burn, Haste The Day, A Change of Pace, The Classic Crime, So They Say, Inhale/Exhale, Waking Ashland, Kids in the Way, Showbread, Spoken, Ruth, The Send, This Day and Age, Disciple, Rookie of the Year, Paulson, The Umbrellas, Rory, Olympia, Nevertheless, Sullivan, Chasing Victory, Lost Ocean, Audio Adrenaline, Fireflight, Jonah 33, Cool Hand Luke, Dizmas, Thousand Foot Krutch, Last Tuesday, Quietdrive, Dave Mellilo, Hundred Year Storm, New Atlantic, Monday Morning, Lorene Drive, Agent Sparks, Down to Earth Approach, and Red, among others. http://www.myspace.com/abandonkansas