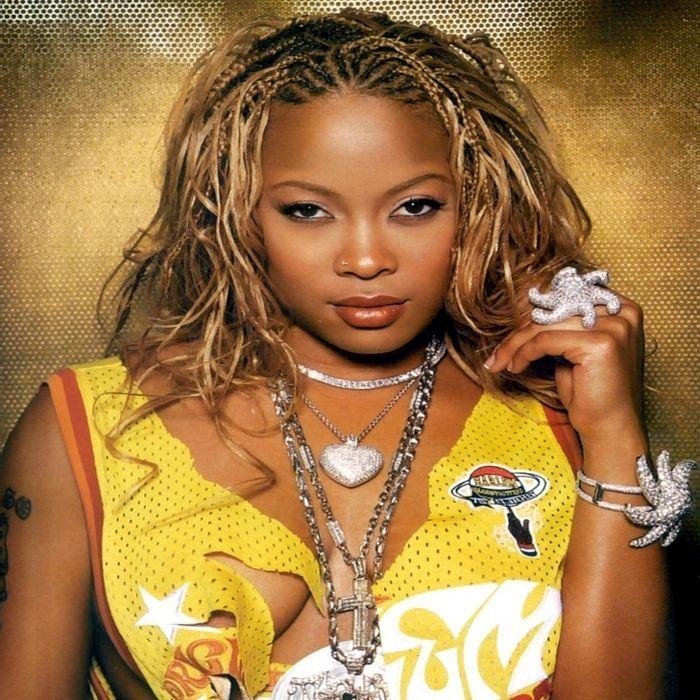 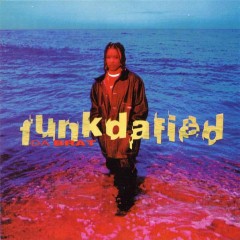 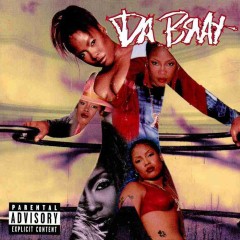 Da Brat (born Shawntae Harris; April 14, 1974 in Joliet, Illinois) is an American Grammy-nominated rapper and actress. Her debut album, Funkdafied (1994), sold one million copies, making her the first female solo rap act to have a platinum-selling album, and the second overall female rap act (solo or group) after Salt N Pepa. Harris is the younger half-sister of actress LisaRaye McCoy.

Harris was born in Joliet, Illinois and raised on Chicago's West Side. Her parents never married, and Harris was subsequently raised in two different households. She lived part of the time with her mother and grandmother and attended a strict Pentecostal church four times a week, where she played drums and sang in the choir. She also lived with her father and his mother, where she had fewer restrictions. Harris attended Kenwood Academy from 1990-1991, where she ran track and played basketball, and she graduated from Academy of Scholastic Achievement, a continuation charter school that caters to at-risk students, in 1993.

In 1992, Harris got a big break when she won the grand prize in a local rap contest sponsored by Yo! MTV Raps. For the prize, she got to meet Kris Kross, and they in turn introduced her to their producer, Jermaine Dupri, who signed her to his So So Def label. Dupri cultivated Da Brat's image as a "female Snoop Doggy Dogg", and she became one of the first female "reality-based" rappers. Harris told the Atlanta Journal-Constitution that her stage name, "Da Brat", was inspired because she is "a spoiled only child." Da Brat's debut album Funkdafied was released in 1994 and entered the rap albums chart at Number #1. The album went platinum, which made her the first female solo rapper to sell one million units. The eponymous single reached #1 on the rap singles chart and #6 on the Billboard Hot 100. She had a follow-up hit from the same album, "Give It 2 You", which reached #26 on the Hot 100.

In 1996, Da Brat released her second full-length album, Anuthatantrum, which included the single "Ghetto Love" featuring T-Boz of TLC. During the rest of the '90s, Da Brat came to be known more for her "featured" appearances on other rappers' and R&B singers' albums rather than for her own solo work. Da Brat was also featured with Kris Kross on their track "Da Bomb" on the album Da Bomb (1993), as well as on their third album Young, Rich and Dangerous (1996). She contributed a rhyme to the hip hop remix of Mariah Carey's hit, "Always Be My Baby" (1996). She also made her feature film debut that year in Kazaam (1996) with Shaquille O'Neal.

In early 2000, Da Brat released her third full-length album Unrestricted, which produced the moderately successful singles "That's What I'm Looking For" (U.S. #56) and "What Chu Like" (U.S. #26), featuring soul singer, Tyrese. The album was not well received compared to Brat's earlier work. However, the new album and new millennium did inspire an image makeover for Da Brat. Abandoning her "gangsta" persona, she decided to follow the trend in popular music and attempted to add to her sex appeal. In 2001, Brat continued her trend of being featured on other artist's remixes, reaching #1 on the Billboard Hot R&B/Hip Hop Singles chart along with rapper Ludacris on the main remix of Mariah Carey's "Loverboy" and being featured artist on Destiny's Child's "Survivor" remix. Da Brat also appeared as Louise in Carey's 2001 movie Glitter. In 2003, Brat released her fourth album, titled Limelite, Luv & Niteclubz, and appeared on the 4th season of VH1's The Surreal Life.

In 2006, she was an onstage guest on Mariah Carey's The Adventures of Mimi Tour in Atlanta, New York City, Long Island, Washington DC, Chicago, and Los Angeles performing her rap verses on the "Heartbreaker" and "Honey" remixes. She was also featured on Kelly Rowland's "Gotsta Go", a bonus track from her 2007 album Ms. Kelly and is also featured on a bonus track from Carey's E=MC² on a track entitled "4real4real". She also co-wrote a song with Mariah Carey called "O.O.C." which appears on E=MC² and contributes backing vocals on the track. In 2007, she participated in the fifth season of the VH1 reality series Celebrity Fit Club. In 2011, she did a remix with Kelly Rowland called "Motivation" featuring Lil Wayne. Following her release from prison, she launched a web series about life after the experience titled "Brat Chronicles: In Transition" on YouTube. She released her new single "Is It Chu?" on iTunes and other digital services on July 2, 2013.

In 2001, Harris pleaded guilty to misdemeanor reckless conduct after she had beaten a woman with a gun during a dispute over VIP seating in an Atlanta nightclub in 2000. The victim in that incident received six stitches for a head wound. Harris ended up serving a year's probation, performed 80 hours of community service, and paid a $1,000 fine. On October 31, 2007, Harris was involved in the altercation that ended in assault at a Halloween party at Studio 72 nightclub in Atlanta. Harris initially argued with a hostess, and when the hostess walked away to talk to her manager, Harris attacked her from behind, striking her in the face with a rum bottle. Harris entered a guilty plea to aggravated assault charges. She was sentenced to three years in prison, seven years of probation, and 200 hours of community service. In May 2010, she was temporarily released from prison as part of a work-release program after serving 21 months. On February 28, 2011, Jermaine Dupri announced that Da Brat was officially released from prison, completing her sentence. Her civil trial stemming from the 2007 altercation is set to begin on February 24, 2014. February 28, 2014 - a civil trial jury awarded ex-NFL cheerleader Shayla Stevens $6.4 million to cover her injuries and past/future loss of earnings. 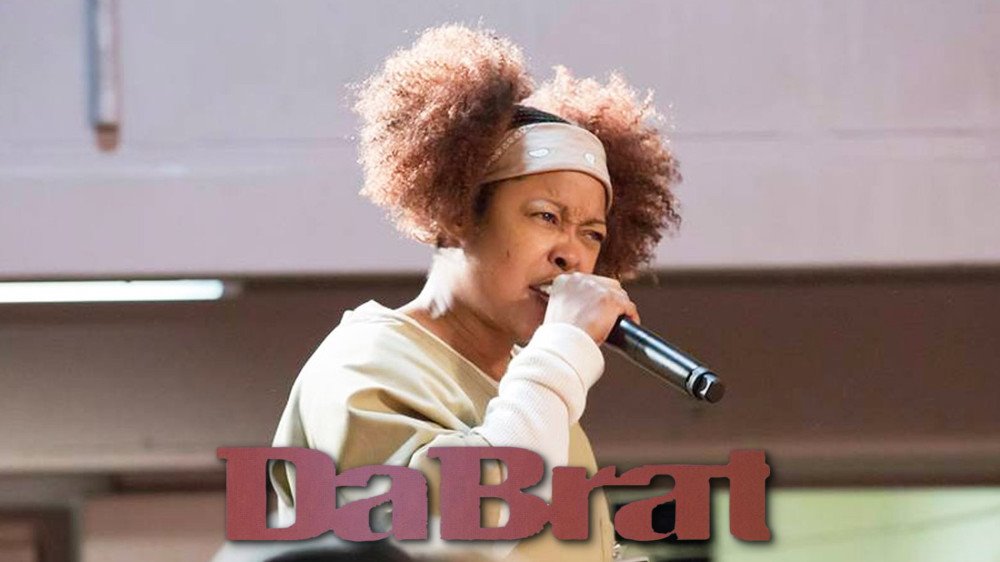 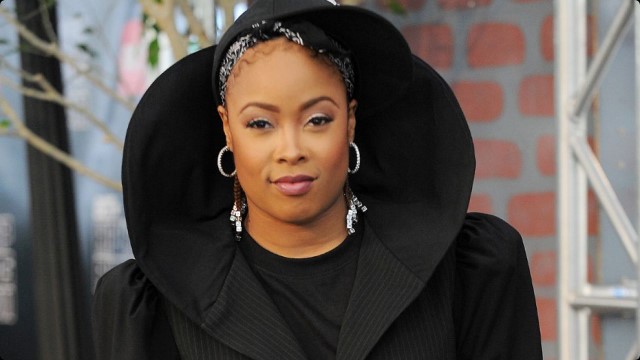 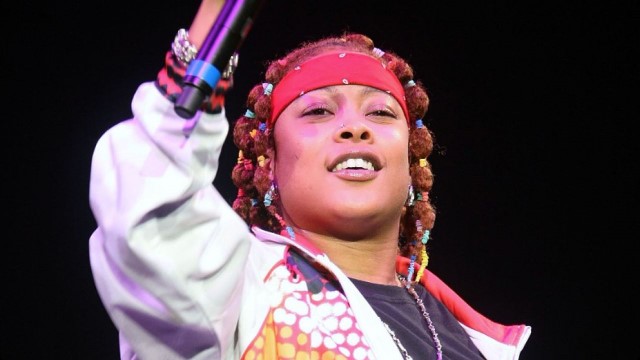 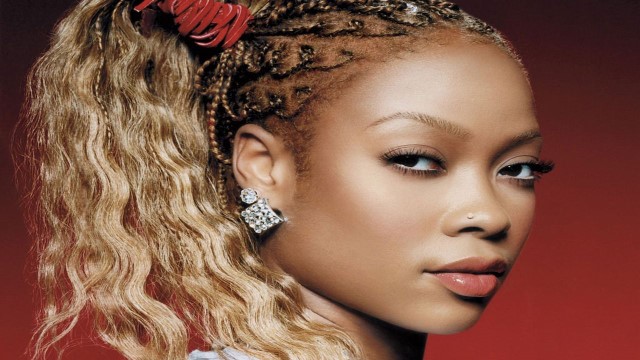