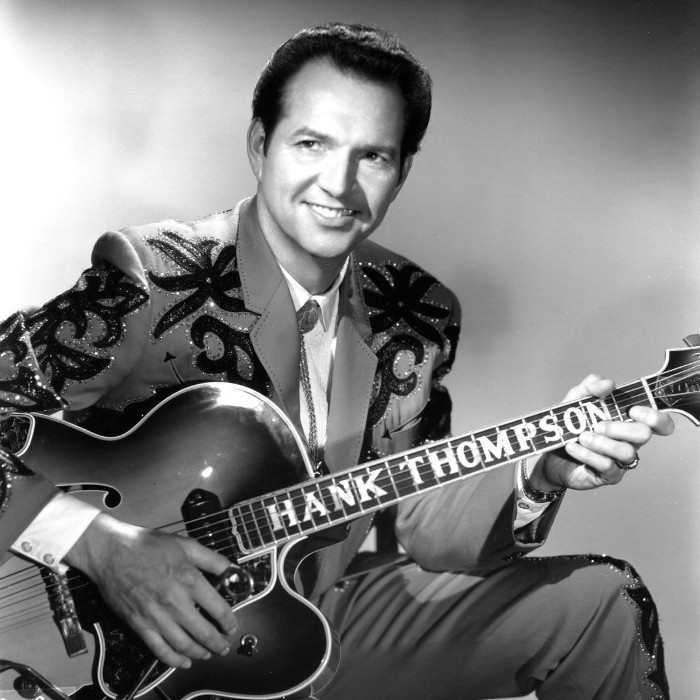 Hank Thompson (September 3, 1925 - November 6, 2007) was a country-western music entertainer whose career spanned six decades, and who has sold over 60 million records worldwide. Thompson's musical style, characterized as Honky Tonk Swing, is a mixture of big-band instrumentation, fiddle and steel guitar that supports his distinctive, gravelly baritone vocals on songs he often writes himself. His backing band, The Brazos Valley Boys, was voted the No.1 Country Western Band for 14 years in a row by Billboard Magazine. He decided to pursue his musical talent after serving in the U.S. Navy in World War II as a radioman and studying electrical engineering at the university level. His first single was "Whoa Sailor" in 1946. The year 1952 brought his first #1 disc, "The Wild Side of Life", which contained the memorable line "I didn't know God made honky-tonk angels" (which inspired the Kitty Wells response, "It Wasn't God Who Made Honky Tonk Angels"). Other hits followed in quick succession in the 1950s and 1960s. Although not as prominent in later decades, he has remained an active and respected performer in the field, finding new audiences as a result of the resurgence of a harder-edged sound in country music. Hank Thompson was elected to the Country Music Hall of Fame in 1989 and was inducted into the Nashville Songwriters Hall of Fame in 1997. He was born 3 September 1925 in Waco, Texas, and passed away at home in Keller, Texas, on 6 November 2007, just four days after cancelling his final tour.