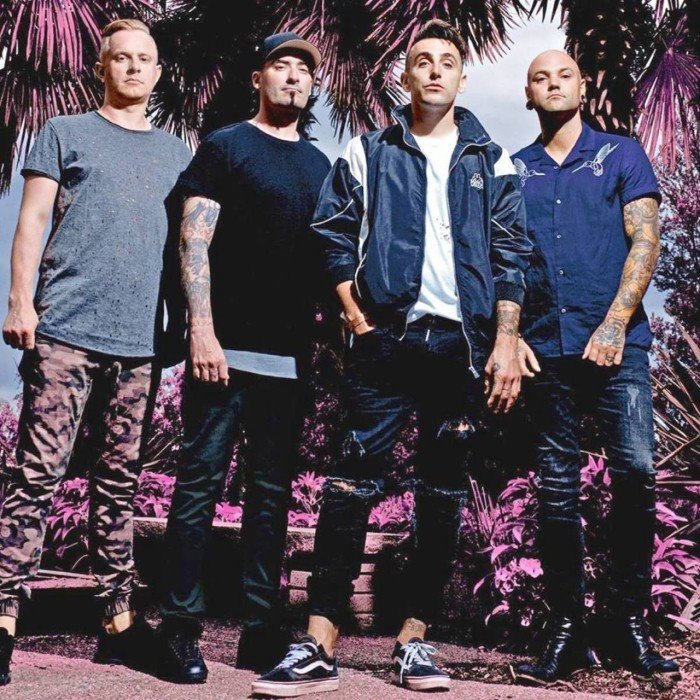 Hedley is a Canadian pop rock band comprising lead singer Jacob Hoggard, Tommy Mac on bass, Dave Rosin on lead guitar and Chris Crippin on drums. The current band retains the original name of Hoggard's pre-Canadian Idol group, although the membership has changed. The band originated in Abbotsford, British Columbia. They were named after the town of Hedley, British Columbia, a name chosen after members heard that it was for sale for $246,000. While the idea of buying the town ran its course, the name remained. There are also rumors that the name "Hedley" originated from Hedley Street in Abbotsford, the hometown of Jacob Hoggard Jacob Hoggard Chris Crippin Tom MacDonald Dave Rosin The Show Must Go Line up all the Idols Who paint on phony smiles Tryin' to ride the fast track for free There's been no free ride in Hedley's steady climb to the top. Over four years, the Vancouver band has earned two multi-platinum albums and won acclaim and a devoted fan base through a constant regimen of hard work and relentless touring. Nor is there an ounce of phoniness in the group, led by irrepressible frontman Jacob Hoggard, a former Canadian Idol contestant himself. In fact, much of Hedley's huge appeal lies in the band members' refusal to take themselves too seriously. "We're not rocket scientists--or rocket surgeons," chuckles Hoggard, about himself, bassist Tom MacDonald, guitarist Dave Rosin and drummer Chris Crippin. "We're the same jerks we've always been, four buddies who like to have fun and make music. But our show is no longer about flashing lights and us running around pulling our pants down. We've really grown as writers, musicians and performers, so now it's the full entertainment package." That refreshing mix of lighthearted candor and emotional honesty lies at the heart of The Show Must Go, Hedley's much-anticipated third album. Working with four producers--Goldfinger's John Feldman (The Used, Story of the Year), Dave Genn (Matthew Good Band), industry veteran David Bendeth (Paramore, Breaking Benjamin) and long-time collaborator Brian Howes (Hinder, Daughtry), who won a 2007 Producer of the Year Juno Award for his work on Hedley's debut--the band has pushed its robust sound forward without sacrificing any of its distinctive edge. The Show Must Go ranges from the electro-tinged opener "Cha-Ching," about reality television's intoxicating allure, and the rap-inflected "Don't Talk to Strangers," a jaundiced look at cougar women on the prowl, to such unabashedly sweet love songs as the piano ballad "Amazing" and the reggae feelgood number "Shelter." Typically Hedley, there's also such odes to hedonism as the hilarious "Young and Stupid" and the riotous "Nine Shades of Red," which describes one of Hedley's typically boisterous nights on the town. Hoggard says the blend of new sounds and honest lyrics with Hedley's trademark fun-loving attitude was crucial to the band's evolution. "Staying current has always been very important to us and growing with our fans as well," he says. "We don't want to alienate people with left-turns in our music, but we also don't want to stagnate. I need to challenge myself and change things up because I have the attention span of a goldfish." For Hoggard, the most adventurous sounds on The Show Must Go can be heard on "Cha-Ching" and "Don't Talk to Strangers." Says Hoggard: "I listen to way more urban and hip-hop music than any other kind, and these songs represent the first time I've been able to explore more of the electronic side of music that I normally listen to. So, for me, they're the most exciting part of this record." At the same time, Hoggard is most proud of songs on the new album like "Amazing" and "Perfect" that stand out for their confessional qualities. "I'm excited about my own personal growth as a musician and a writer right now," he says. "I'm very explicit emotionally when I write songs like that, which makes it kind of scary to think about performing them because I have to go up on stage and be really honest and vulnerable. But that's exciting too." Of all the numbers on The Show Must Go, Hoggard's favorite is "Sweater Song," which is based on a real romantic encounter. "It's about new love and the torture of being together and then apart. I especially like the way it builds to a sexy climax." Since forming in Vancouver, B.C., naming themselves after the nearby community of Hedley when the town made news for putting itself up for sale, Hoggard, MacDonald, Rosin and Crippin have forged an impressive track record. The band's self-titled debut featured the hit singles "Trip" and "On My Own," while the group's sophomore CD, Famous Last Words, included such chart-toppers as "Never Too Late" and "For the Nights I Can't Remember." Extensive touring with Bon Jovi and Simple Plan plus dates with Nickelback deepened the exposure. And the band swept last year's MuchMusic Video Awards and took home three trophies at the 2009 Canadian Radio Music Awards, including Song of the Year, Chart Topper Award and Fan's Choice Award. In the video for "Cha-Ching," the successful first single from The Show Must Go, Hoggard and his bandmates play both themselves and greedy executives cashing in on fame-seeking contestants. "It's essentially about how far you're willing to go for fame," explains Hoggard. "At the same time, we're taking the piss out of ourselves. After all, we're trying to be famous too. Satire makes it easier to maintain your grasp on reality." They may not be rocket surgeons, saving lives or saving the world, but Hedley is clearly making a contribution to the music scene. From the fizzy pop-punk of its debut to the sophisticated pop-rock of The Show Must Go, Hedley continues to prove that mixing frivolity with thoughtfulness and showmanship with songcraft is the best formula for success. http://hedleyonline.com