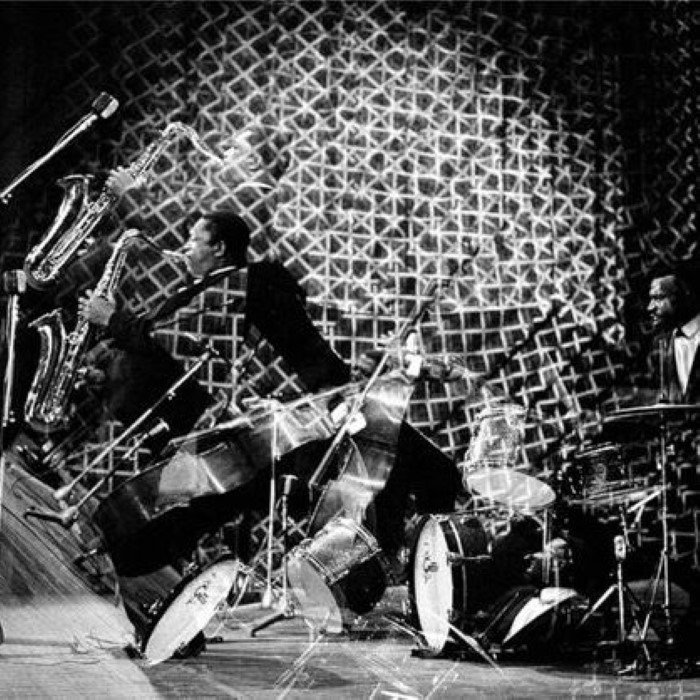 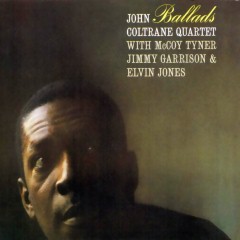 John Coltrane formed his first group, a quartet, in 1960. After moving through different personnel including Steve Kuhn, Pete LaRoca, and Billy Higgins, the lineup stabilized in the fall with pianist McCoy Tyner, bassist Steve Davis, and drummer Elvin Jones. Tyner, from Philadelphia, had been a friend of Coltrane’s for some years and the two men long had an understanding that the pianist would join Coltrane when Tyner felt ready for the exposure of regularly working with him. Also recorded in the same sessions were the later released albums Coltrane’s Sound and Coltrane Plays the Blues.

Still with Atlantic Records, for whom he had recorded Giant Steps, his first record with his new group was also his debut playing the soprano saxophone on the hugely successful My Favorite Things. Around the end of his tenure with Miles Davis, Coltrane had begun playing soprano saxophone, an unconventional move considering the instrument’s near obsolescence in jazz at the time. His interest in the straight saxophone most likely arose from his admiration for Sidney Bechet and the work of his contemporary, Steve Lacy, even though Miles Davis claimed to have given Coltrane his first soprano saxophone.

The new soprano sound was coupled with further exploration. For example, on the George Gershwin tune “But Not for Me”, Coltrane employs the kinds of restless harmonic movement (Coltrane changes) used on Giant Steps (movement in major thirds rather than conventional perfect fourths) over the A sections instead of a conventional turnaround progression. Several other tracks recorded in the session utilized this harmonic device, including “26-2,” “Satellite,” “Body and Soul,” and “The Night Has A Thousand Eyes.”

Shortly before completing his contract with Atlantic in May 1961 (with the album Olé Coltrane although Atlantic would continue to release recordings from their vaults for many years), Coltrane joined the newly formed Impulse! Records label, with whom the “Classic Quartet” would record. It is generally assumed that the clinching reason Coltrane signed with Impulse! was that it would enable him to work again with recording engineer Rudy Van Gelder, who had taped both his and Davis’ Prestige sessions, as well as Blue Train. It was at Van Gelder’s new studio in Englewood Cliffs, New Jersey that Coltrane would record most of his records for the label.

By early 1961, bassist Steve Davis had been replaced by Reggie Workman while Eric Dolphy joined the group as a second horn around the same time. The quintet had a celebrated (and extensively recorded) residency in November 1961 at the Village Vanguard, which demonstrated Coltrane’s new direction. It featured the most experimental music he’d played up to this point, influenced by Indian ragas, the recent developments in modal jazz, and the burgeoning free jazz movement. Longtime Sun Ra saxophonist John Gilmore was particularly influential; the most celebrated of the Vanguard tunes, the 15-minute blues, “Chasin’ the Trane”, was strongly inspired by Gilmore’s music.

During this period, critics were fiercely divided in their estimation of Coltrane, who had radically altered his style. Audiences, too, were perplexed; in France he was famously booed during his final tour with Davis. In 1961, Down Beat magazine indicted Coltrane, along with Eric Dolphy, as players of “Anti-Jazz” in an article that bewildered and upset the musicians. Coltrane admitted some of his early solos were based mostly on technical ideas. Furthermore, Dolphy’s angular, voice-like playing earned him a reputation as a figurehead of the “New Thing” (also known as “Free Jazz” and “Avant-Garde”) movement led by Ornette Coleman, which was also denigrated by some jazz musicians (including Trane’s old boss, Miles Davis) and critics. But as Coltrane’s style further developed, he was determined to make each performance “a whole expression of one’s being”, as he would call his music in a 1966 interview.

In 1962, Dolphy departed and Jimmy Garrison replaced Workman as bassist. From then on, the “Classic Quartet”, as it would come to be known, with Tyner, Garrison, and Jones, produced searching, spiritually driven work. Coltrane was moving toward a more harmonically static style that allowed him to expand his improvisations rhythmically, melodically, and motivically. Harmonically complex music was still present, but on stage Coltrane heavily favored continually reworking his “standards”: “Impressions”, “My Favorite Things”, and “I Want to Talk About You.”

The criticism of the quintet with Dolphy may have had an impact on Coltrane. In contrast to the radicalism of Trane’s 1961 recordings at the Village Vanguard, his studio albums in 1962 and 1963 (with the exception of Coltrane, which featured a blistering version of Harold Arlen’s “Out Of This World”) were much more conservative and accessible. He recorded an album of ballads and participated in collaborations with Duke Ellington on the album Duke Ellington and John Coltrane and with deep-voiced ballad singer Johnny Hartman on the album John Coltrane And Johnny Hartman. The Impulse compilation Coltrane For Lovers is largely drawn from these three albums. The album Ballads is emblematic of Coltrane’s versatility, as the quartet shed new light on old-fashioned standards such as “It’s Easy to Remember.” Despite a more polished approach in the studio, in concert the quartet continued to balance “standard” and its own more exploratory and challenging music, as can be seen on the Impressions album (two extended jams including the title track along with “Dear Old Stockholm”, “After the Rain” and a blues), Coltrane At Newport (where he plays “My Favorite Things”) and Live At Birdland both from 1963. Coltrane later said he enjoyed having a “balanced catalogue.”

The Classic Quartet produced their most famous record, A Love Supreme, in December 1964. A culmination of much of Coltrane’s work up to this period, this four-part suite is an ode to his faith in and love for God (not necessarily God in the Christian sense — in the liner notes of Meditations he says “I believe in all religions”). These spiritual concerns would characterize much of Coltrane’s composing and playing from this point onwards, as can be seen from album titles such as Ascension, Om and Meditations. The fourth movement of A Love Supreme, “A Love Supreme, Part IV-Psalm”, is, in fact, a musical setting for an original poem to God written by Coltrane, and printed in the album’s liner notes. Coltrane plays almost exactly one note for each syllable of the poem, and bases his phrasing on the words. Despite its challenging musical content, the album was a commercial success by jazz standards, encapsulating both the internal and external energy of the quartet of Coltrane, Tyner, Jones and Garrison. Indeed the previous album Crescent recorded only a few months before already shows the adventurousness and rapport between these musicians. The album was composed at Coltrane’s home in the Dix Hills neighborhood of Huntington, New York.

The quartet only played A Love Supreme live once — in July 1965 at a concert in Antibes, France. By then, Coltrane’s music had grown even more adventurous, and the performance provides an interesting contrast to the original.

In his late period, Coltrane showed an increasing interest in avant-garde jazz, purveyed by Ornette Coleman, Albert Ayler, Sun Ra and others. In developing his late style, Coltrane was especially influenced by the dissonance of Ayler’s trio with bassist Gary Peacock and drummer Sunny Murray, a rhythm section honed with Cecil Taylor as leader. Coltrane championed many younger free jazz musicians, (notably Archie Shepp), and under his influence Impulse! became a leading free jazz record label.

After recording A Love Supreme, Ayler’s apocalyptic style became more prominent in Coltrane’s music. A series of recordings with the Classic Quartet in the first half of 1965 show Coltrane’s playing becoming increasingly abstract, with greater incorporation of devices like multiphonics, utilization of overtones, and playing in the altissimo register, as well as a mutated return to Coltrane’s sheets of sound. In the studio, he all but abandoned his soprano to concentrate on the tenor saxophone. In addition, the quartet responded to the leader by playing with increasing freedom. The group’s evolution can be traced through the recordings The John Coltrane Quartet Plays, Living Space, Transition (both June 1965), New Thing At Newport (July 1965), Sun Ship (August 1965), and First Meditations (September 1965).

In June 1965, he went into Van Gelder’s studio with ten other musicians (including Shepp, Pharoah Sanders, Freddie Hubbard, Marion Brown, and John Tchicai) to record Ascension, a 40-minute long piece that included adventurous solos by the young avant-garde musicians (as well as Coltrane), and was controversial primarily for the collective improvisation sections that separated the solos. After recording with the quartet over the next few months, Coltrane invited Pharoah Sanders to join the band in September 1965.

By any measure, Sanders was one of the most abrasive, virtuosic saxophonists then playing. While Coltrane used over-blowing frequently as an emotional exclamation-point, Sanders would opt to overblow his entire solo, resulting in a constant screaming and screeching in the altissimo range of the instrument. The more Coltrane played with Sanders, the more he gravitated to Sanders’ unique sound. John Gilmore was also a major influence on Coltrane’s late-period music, as well. After hearing a Gilmore performance, Coltrane is reported to have said “He’s got it! Gilmore’s got the concept!” He also took informal lessons from Gilmore.

By late 1965, Coltrane was regularly augmenting his group with Sanders and other free jazz musicians. Rashied Ali joined the group as a second drummer. This was the end of the quartet; claiming he was unable to hear himself over the two drummers, Tyner left the band shortly after the recording of Meditations. Jones left in early 1966, dissatisfied by sharing drumming duties with Ali. Both Tyner and Jones subsequently expressed displeasure in interviews, after Coltrane’s death, with the music’s new direction, while incorporating some of the free jazz form’s intensity into their own solo projects. 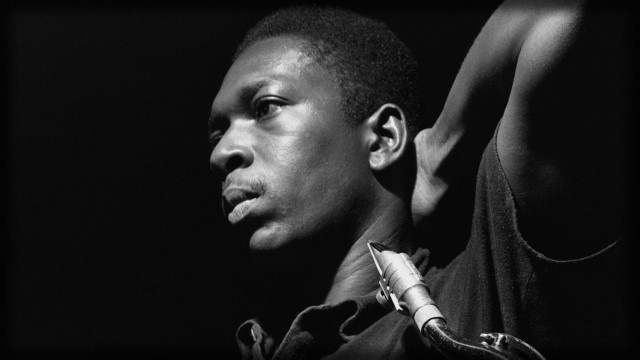