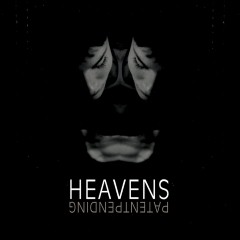 The friendship that spawned Patent Pending, the debut release from Heavens, began several years back when Matt Skiba moved to Los Angeles from Chicago, and wound up becoming housemates with Josiah Steinbrick, himself an East Coast native.

"We're both music nerds," Skiba explains. "So one day were both hanging out listening to records and Joe pulls out this cassette he had recorded with just these instrumental tracks. Even without lyrics I could tell they were amazing songs and said that we should start writing together. I had a sixteen-track in my room that I was using to demo Alkaline Trio songs, and once I fell in love with Joe's songs, I thought, I could write lyrics to these so easily."

The album itself was written in about a week in August of 2004. "I would pick up some wine and we'd head in my room to write," remembers Skiba. "I would basically go into my room and write a song," Steinbrick adds. "Then I'd bring it back to Matt's room and we'd lay it down. Matt would add lyrics to it and we'd refine the arrangements to perfect them."

"With Alkaline, I'm usually thinking Ramones and Misfits," Skiba adds. "But Joe is such an incredibly talented, imaginative player, that he built this foundation that let me feel like I could sing low in my register, and let the influences of Sisters of Mercy come out of me." With Matt's vocal influences paving the way for his gentle, almost whispering melodies, Steinbrick's distinct soundscapes were shaped under the influence of pop experimentalists such as Wire, Brian Eno, and Television.

With lyrics as pretty as they are eerie, Skiba brings us images of an almost comforting brutality, a warm razor-blade embrace filled with blood dropping from the sky and arterial spra...