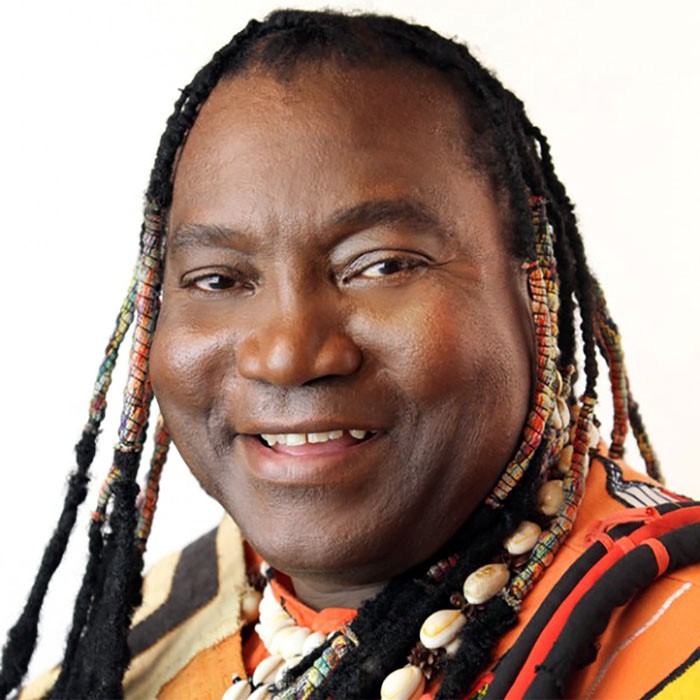 Wes first saw the light of day under the baobab tree in Moutaba, Cameroon which lies some hundred miles away from the city of Douala. From the tender age of two, his grandfather taught him about healing music and how to play the kalimba instrument. The pair soon became inseparable. His grandfather taught him his love of Bantu history and the wisdom of the elephant of animist bantou philosophy. This was responsible for an important part of his education: "it was in bush school and during night-time gatherings listening to the metallic beat of the kalimba that I learned the adventures of the father of all ancestors, E'kwa Mutu." In 1977, at the age of ten, Madiko became the conductor of the group Kwa Kwassi, which means "think right". This musical formation brought together the most talented youngsters in the village, who received instruction together in history and art. In 1987, once more, Wes started to enjoy musical night of the Wouri riverbanks. He was impatient to get back in touch with the Moutaba spirit, to promote bafoun-bantou tradition and returned to the home of his ancestors. He revived the Kwa Kwassi orchestra and embarked on a tour in Bafoun country. A group of tourists turned up, and were all bewitched by the music, including a young woman from Lille, France. And so Wes set off for Europe, with his kalimba under his arm. In 1988, the group Fakol with Benjamin Valfroy and Jo Sene was formed. Fakol played in the Netherlands and in other countries throughout Europe. Aside from his musical activity, Wes started to develop an involvement in social work. He visited schools in Lille, and worked with children. Wes took great pleasure in transmitting the wisdom of the elephants and the ancient history of Africa. Two years after, Jacques, Wes's brother and a talented guitarist, died. Their father died a few months later, following a motorbike accident. These incidents led Wes to meditate on the fragility of the self, saying: "there comes a time when a feeling of uselessness invades you and threatens to break you, but you hang in there, convinced that there's always a breath of life somewhere." In 1992 Wes traveled to the US and released the album Roots. During this tour, he gave concerts in Atlanta, Georgia. In this period Wes also met Michel Sanchez of Deep Forest, and they immediately formed an artistic collaboration, starting work on the album Welenga, which means "Universal Conscience". In 1996 Wes signed with Sony Music France to release Welenga. Thus Wes became one of the first stars of the group Deep Forest. He gave concerts in Sydney, Melbourne, Brisbane, in Japan, Hungary, Poland, and Prague. The French TV channel TF1 called Alane the summer song of the year 1997. From 1997 on Wes performed a G7 concert with Deep Forest in Lyon, France, and is known as a multitalented artist whose music enriches the world, as well for his humanuity as an individual concerned with the plight of children and those less fortunate in the world. Wes is the first African artist with a recording going diamond. At the 10th Anniversary of the World Music Awards in Monaco, presided over by Prince Albert, Wes received the Award for best record sale of the year by an African artist (May 6, 1998). In the same year he performed I love Football for the FIFA World Cup in France. In 2002, Paramount Pictures invited Wes to perform in the movie The Wild Thornberry, and his song Awa Awa was on the soundtrack. This song was also included in the soundtracks for the German movies Falsche Partner and Ein Fall Fuer Zwei. Alane was used in the German films Zahn Um Zahn and Aus Heiterem Himmel. As of 2007, Wes is working on a new Biography and spiritual book. He is also about to release a new album.