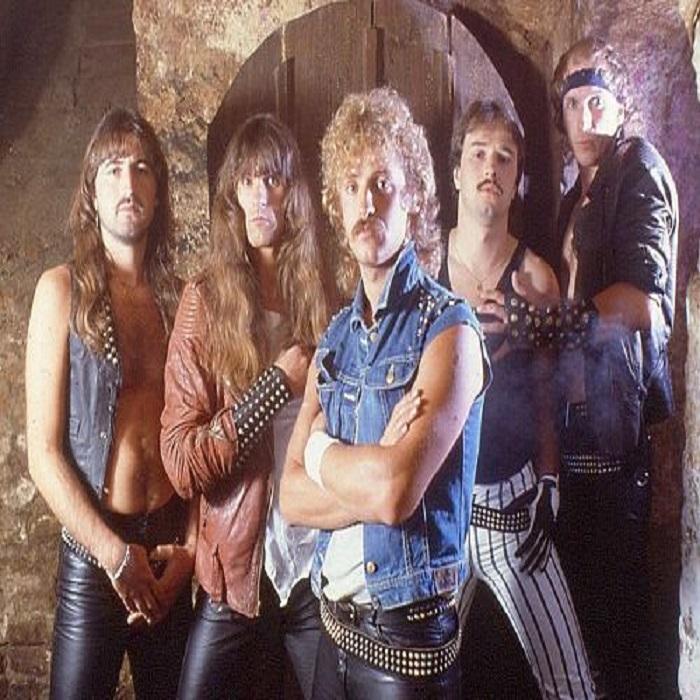 Bonfire (originally Cacumen) is a German heavy metal band, founded in Ingolstadt, Germany in 1972. Bonfire started 1986 from Cacumen where the members just changed the name into Bonfire because of the advice of the Record Company and the Management. The original founders Hans Ziller and Claus Lessmann are still in Bonfire and are the only ones who have the rights on the name Bonfire.

Cacumen (1972-1986):
In 1972, in the Bavarian town of Ingolstadt the teenaged guitarist Hans Ziller, put together a rock band called Cacumen with his guitarist brother Karl and gathered a bunch of friends to complete the band. The name of the group was taken from a school test Hans had done and it translates from Latin as "the top of a mountain". For the next six years, the band played in small local venues, but formed a fan base in their hometown. In 1978, the group consisted of Hans and Karl on guitars, Horst Maier on guitar (in 1983, Maier's last name would become Maier-Thorn), Hans Hauptmann on bass and Hans Forstner on drums. When the band started searching for a replacement singer, Claus Lessmann, a fellow student of Hans', was hired.
Lessmann previously had performed in the bands Ginger and Sunset and was known for his harmonic vocals and he fit in perfectly with Cacumen. With this line-up, the band had a chance to start branching out to venues outside Ingolstadt. The band recorded a single in 1979 called "Riding Away", which featured the song "Wintertale" on the flip side. The group used this opportunity to begin touring in clubs, schools and even in parking lots. The fan base grew and Cacumen was finally signed to an independent label. By then though, Karl Ziller had departed the group. The self-titled Cacumen album was released in 1981 and featured a new version of "Riding Away".
Eventually, Cacumen got in contact with Hanns Schmidt-Theissen, who owned a small music studio. Schmidt-Theissen had played with the group on the "Riding Away" single and was supporting the band at live venues on keyboards. Since money was poor and Schmidt-Theissen was willing to help, they recorded the album Bad Widow at his studio in Rodgau, Germany in 1982. Schmidt-Theissen helped the group to get a contract, and was successful at the time.
Meanwhile, the fan base of the band was growing as was the number of performance dates. In 1983, Robert Prskalowicz replaced Hans Hauptmann on bass and this group became the best-known Cacumen formation, but when they signed with BMG, the group had had a total make-over. Prskalowicz and Hans Forstner were no longer with the group as of March 1985. They departed because they could not commit to the group full-time and were replaced with Joerg Deisinger on bass, previously from Rascal and Dynasty, while Dominik Hülshorst from Darxon became the new drummer. The band updated also their image, donning the standard look of an 80s hard rock group. Finally, the company requested a name change, as they found Cacumen was too hard for the average customer to pronounce and not a very marketable name. After a brain storming session, the new name selected was Bonfire, which came into effect in May 1986.

Bonfire, the first coming (1986-1994):
Bonfire's worldwide debut album was released in June 1986 with the title Don't Touch the Light. During the recording of the follow-up album in May 1987, Hülshorst was fired due to musical differences and Bonfire proceeded to release their Gold seller album Fireworks as a quartet, with the drums played by Ken Mary from the American heavy metal band Fifth Angel. Two versions of this album exist, the worldwide version and the North American version, which cover features the four members and contains the song "You Make Me Feel" from the first album.
Between the second and third albums, Bonfire went through many changes. Although Tommy Wagner filled the drum kit for a TV spot, the band needed a new full-time drummer, which appeared in December 1987, when Edgar Patrik from Sinner, Samson and Tyran Pace joined. In July 1988, during the Fireworks Tour, Maier had to leave due to his rheumatism becoming too much of a crippling factor to play guitar and be on stage. Taking his spot in August was Angel Schleifer, formerly of Doc Savage, Red Alert, Sinner, Mad Max, Pretty Maids and Helter Skelter. The tour went on and once it was completed, the band settled down to collaborate for a new album. It was then that Hans Ziller had problems with the record company and the band's management due in part to his family commitments at the time. Against the band's better decisions, he was fired from the group for not having his focus on the band and in June 1989 and Bonfire carried on as a quartet. It should be noted that Bonfire's first two albums were the only ones that were released commercially in North America.
Despite the business decision, Lessmann and Ziller maintained a great friendship. When Ziller formed his own group, Lessmann was asked to write songs as well as perform vocals. The record company's policy did not allow him to do so, leaving Ziller the task to find a replacement singer for his new band, EZ Livin'.

The decision to remove Ziller from Bonfire began to show on Lessmann, who had remained in the band. After many attempts to break through in the North American scene and what he thought was a disappointing fourth album, Lessmann left the band on September 25, 1992. His announcement was not a total shock to the rest of the band, but it did leave them with the dilemma of who would take his place. One vocalist that had the group's attention was Michael Bormann, who was singing for Letter X and had his own side-group called Jaded Heart. Moreover, he was previously in High Voltage and the J.R. Blackmore Group. Even though he was willing to sing with Bonfire, he was committed to his other two projects so the group continued looking. The unsuccessful attempt to find a full-time vocalist led to Bormann becoming the new frontman of Bonfire in March 1993. Although he did leave Letter X, he maintained his band Jaded Heart.
Despite the new singer, Bonfire were in a rut now. Their record company refused to release any new material that did not have Lessmann singing and the years of grunge music had started. The band felt that the end was in sight and released a live album featuring concert recordings from the Point Blank Tour with Lessmann on vocals. The album Bormann had sung on was shelved (but later released as a bootleg called Bonfire - End of an Era Demos) and Bonfire performed for the last time on July 29, 1994 without officially breaking up.

Claus & Hans - Lessmann/Ziller to Ex (1992-1996):
While Bonfire was trying to carry on with their new lead vocalist, Lessmann and Ziller reunited in 1992 to form the project Lessmann/Ziller, after Hans Ziller had disbanded EZ Livin'. In 1993, they released the German sung EP Glaub Dran. The EP was followed by a few single releases of songs that were not on the initial recording. The project had limited success, not as was initially expected. In 1995, Lessmann/Ziller evolved to become a group called Ex, which in May featured Joerg Deisinger on bass and Dominik Hülshorst on drums, almost a reunion of the 1986 Bonfire line-up. EX was a good band, but Lensmann and Ziller realized that the only means of recapturing their old fan base was under the name Bonfire.

The Return of Bonfire - Charade emerges (1996-2000):
In 1996, Lessmann and Ziller decided to start legal proceedings to get the rights to the Bonfire name as well as to the music from 1986 to 1992. On July 3, a one-time payment was made to the last Bonfire members of 1994 and Lensmann and Ziller renamed their Ex project to Bonfire. The second coming began with the reissue of Glaub Dran with other songs in English in 1996. In 1997 they hired Chris Lausmann on guitar and keyboards, who had played with Affair and Frontline; Uwe Kohler on bass, formally from Black Tears, Paradise Leaf, Big Apple, Lipstikk, Blitzkrieg and British Steel; and finally Jurgen Wiehler on drums, who had played with Backdoor Affair, Heaven Sent, Chain Reaction, Loud & Proud, EZ Livin', Parish Garden, Wet Paint and 88 Crash.
Also in 1997, Michael Bormann and Angel Schleifer got back together and wanted to release the shelved Bonfire album they had recorded in 1993. Joerg Deisinger was not interested and Edgar Patrik had other commitments, so the reunion was only for the duo composed by Bormann and Schleifer. Because of the change of ownership for the Bonfire name, Bormann and Schleifer decided to call themselves Charade. The shelved album was released in 1998 in Japan, becoming a highly sought after CD. The partnership between Bormann and Schleifer ended in May 2011, releasing 2 albums in total.

World-wide exposure (2001-present):
Since 1996, Bonfire has released at least one album a year and their fan base has grown, surpassing their 1980s popularity. In 2002, Lausmann left the group, but that did not stop the band. In 2004, after successfully gaining the rights to their pre-Bonfire material, the band released a five-part CD series called The Early Days. Parts 1, 2 and 3 were the reissuing of the Cacumen albums, part 4 was the EZ Livin' album and part 5 was the Lessmann/Ziller album, every one of them featuring bonus material.
In 2006, Bonfire celebrated their 20th anniversary with Chris Limburg from Vice, Wet Paint and Lustfinger in the role of co-guitarist. In 2008, Bonfire released a rock opera album called The Räuber. A special DVD of the opera performance that also featured new music videos of several of the songs from the album was released soon afterwards, including a remixed version of the song "You Make Me Feel". The new version of the song is featured on the PlayStation game SingStar.
2009 saw the return of yet another original member of Bonfire. Jürgen Wiehler left the band unexpectedly and was replaced with the returning Dominik Hülshorst on January 15. This was followed by the long anticipated return to the North American stage as the band performed at the Rocklahoma Festival on July 12 in Pryor, Oklahoma, USA. In 2010, on March 25, Bonfire signed to a major label again, this time with Universal Music, with hopes that they would be handled and promoted much better than BMG did in the 1980s. Unfortunately this partnership lasted only a few months. They released the single "Deutsche National Hymne" for the FIFA World Cup in South Africa 2010, remaining on the German Top 50 Single Charts for seven weeks.
In 2011, the band released Branded as a studio album, which also made the German album charts. This was followed up with a complete live performance release of their 1987 album, Fireworks, entitled Fireworks Still Alive. Dominik Hülshorst's stay with Bonfire unfortunately was short, ending in March 2012. He was replaced by Gregorian drummer Harry Reischmann.

Line-Ups:
The following is a chronology of the various band members of Bonfire from 1978 to the present.