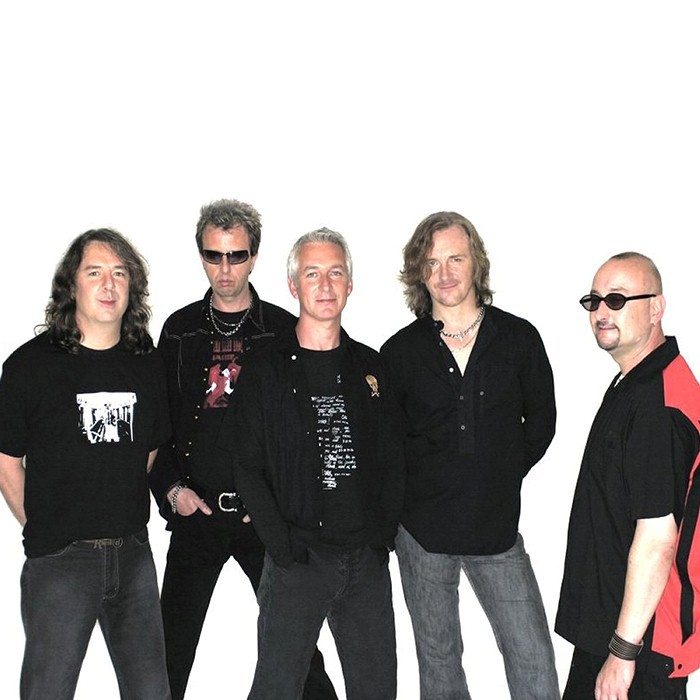 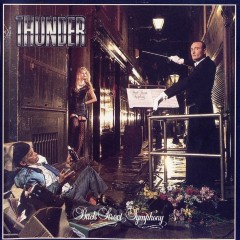 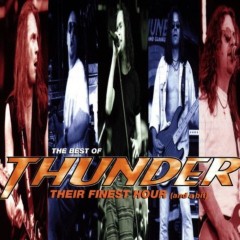 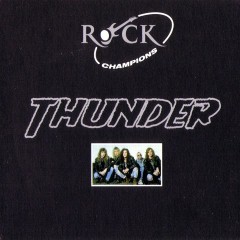 Formed at the turn of 1989, Thunder have enjoyed an eventful 20 year career that has thankfully witnessed more highs than lows. The release of “Bang!” finds the quintet on a very remarkable high, and still very much masters of their own destiny.

Having met in 1971 when they were 11, Danny and Luke have been playing in bands together since they were 15, so they knew exactly what they were going for in 1988 when they began working with Andy Taylor (Duran Duran) as producer. Harry James occupied the drum stool, and despite being the engineer on the early sessions, Ben Matthews swiftly joined to play guitar and keyboards. Showcases were done, Mark “Snake” Luckhurst was recruited to play bass, and a record deal was inked with EMI.

The first show was in front of a mere 35 punters at a gig in Southend in July 1989. They did a further 6 shows before the band entered the studio with Taylor and engineer Mike Fraser (Bryan Adams, Aerosmith etc) to cut their first magnificent offering in the shapely form of debut album 'Backstreet Symphony'. Curiously, at least 500 people have subsequently claimed to have been at that first gig in Southend..

More touring followed, including two dates at the NEC in Birmingham opening for Aerosmith, and the band's fondness for the road would only increase their popularity.

Luke “In our previous band Terraplane, we never got any support from radio and TV, so with Thunder we just assumed the worst. We just decided to get out there and play. We knew our ability to play live would make us friends, and if we only played to ten people we felt confident that those ten people would tell their mates and another ten would be along to the next gig. We grafted, and we enjoyed it, and it worked! We went from a pub in Shepherd's Bush to headlining three sold out nights at Hammersmith Odeon within fifteen months. I’m very proud of that”

Thunder would play bigger venues than Hammersmith on the back of their debut album. Following European dates opening for Heart earlier that year, Thunder, not for the last time in their career, would play the 'Monsters Of Rock' event at Donington Park in August 1990. 'Kerrang', 'Raw' and 'Metal Hammer', the three leading UK rock magazines at the time, deservedly voted them the best new band of the year.

"Big outdoor shows suit us,” opines Morley. “Whether it’s Donington or Wembley Stadium with Bon Jovi in 1995, we do these kinds of shows very well. We're a very natural, festival band. Perhaps that's because we encourage people to enjoy themselves?”

Thunder's fondness for hard graft and a good laugh into the bargain turned them into one of the most visible and popular British rock acts of the 90s. By the time the Taylor/Morley produced second album, 'Laughing On Judgement Day' was released in August 1992 (held off the Number One spot in the UK's album chart only by a Kylie Minogue greatest hits package) the quintet had worked extremely hard out on the road. Not only had they made inroads into Scandinavia, and South America, they had also appeared at the Milton Keynes Bowl alongside ZZ Top, experienced the delights of New Year's Eve in Tokyo on a bill with Metallica, Europe and Tesla and, to perhaps top it all, made a triumphant return to the Donington stage as guests of Iron Maiden.

However, the tour to support 'Laughing On Judgement Day' (which included headlining dates in the UK and a European tour supporting Extreme) proved a step too far for bassist Snake. He quit after the Japanese tour at the end of 1992. Snake's immediate replacement was ex Great King Rat man Mikael Höglund, and with the Swede in tow Thunder toured Canada in early 1993, before returning to Europe for more headlining shows and an appearance on the bill at Don Valley Stadium in Sheffield headlined by Def Leppard.

Third album 'Behind Closed Doors' was recorded in the US with Mike Fraser producing, and was released in January 1995, after another year-end UK tour. Thunder spent the summer touring throughout the UK and Europe playing on bills with Bon Jovi and Van Halen, including gigs at Cardiff Arms Park, Wembley Stadium and Feyenoord Stadium in Rotterdam. They also headlined the Bulldog Bash that year before venturing to Japan once more. However, the album was released during a particularly grim period for bands like Thunder. Grunge had hit in a big way. Staring at your shoes was in. Singing songs about dirty love was not…

Luke “I don't think we were particularly affected by Grunge in terms of musical influence. Although there was some great music that came out of that period - Alice In Chains and Soundgarden spring to mind - the problem was that America, in particular, was sold on Grunge to the detriment of everything else. It definitely hurt us, but not just us of course”

Thunder gritted their teeth and carried on. Despite the departure of Mikael Höglund due to family pressures, they recorded and released 'The Thrill Of It All' through new label Castle in February 1997. By this time, former Then Jericho bassist Chris Childs had been added to the ranks. That year found them playing throughout Europe and also putting in an appearance at Finsbury Park in London on a bill headlined by Kiss.

Surprisingly, eight months after the release of the next studio album, 'Giving The Game Away', in 1998, Thunder announced a split due to “outside business forces”, going out in typical style with a series of farewell shows, climaxing at Dingwalls in Camden on May 4 2000.

Danny “We’d been at it solidly for eleven years, we were still doing great touring business and we were solid as a unit, but we felt frustrated. There didn't seem to be any chance for us to connect with new punters. Our label seemed content to sell reasonable numbers of records then shut up shop and count the money. We felt a bit like hamsters in the wheel. We weren't going forwards. In the end I told the band I wanted to stop, and I suggested they get another singer. They didn’t want to continue without me, so, with heavy hearts, we announced the split”

We thought it was all over…..

Not so. Like the proverbial bad penny, Thunder returned in 2002.

While Danny pursued other activities within the music business or, as he describes it, a “varying portfolio of interests” (i.e. managing a band, record label consultant and video and tour production), Luke recorded a solo album ('El Gringo Retro'). Meanwhile, Ben got back into his earlier role as a recording engineer, Harry joined Magnum, and Chris returned to session work. Having been offered a deal to make a different kind of record, it wasn't long before Luke and Danny teamed up again in Bowes & Morley, a musical vehicle that has so far produced two albums.

So, why reform? Let Danny explain…

“I had the idea to put 'Monsters Of Rock' into arenas and make it a tour. I took the concept to Live Nation. I convinced them it was a workable thing to do, thinking that my role would be behind the scenes, and just walking around telling people what to do! They had other ideas, and felt Thunder should reform and be on the bill. I wasn't sure, but I took it back to the guys, who basically bit my arm off! Luke wanted to do a record straight away, but I knew it would get out of hand, and I wasn’t ready to jump straight back into the fire, so we compromised with an EP to start with. When the news got out, we were offered record deals, but the internet had arrived in a big way, and we felt we knew enough about the record business to form and run our own label. I also felt we needed to get a proper distribution deal before doing a full blown LP. I wasn't really interested in sitting at home licking labels, though for a while I did...”

Luke “The thing is, we never fell out, we’d all remained good friends. When the offer for the 'Monsters Of Rock' tour came in, we went for it. We felt that at the very least we'd have a laugh and enjoy ourselves. After that we’d have to see if there was any goodwill out there for us. We seriously underestimated the goodwill.. The records and DVDs we’ve released since then have sold really well, so it appears we made the right move, and the best bit is we’re doing it all on our own terms.”

Thunder entered their 20th anniversary year with a new album. “Bang!” their 9th studio LP was released on the 3rd of November 2008 on their own STC Recordings label (distributed via Universal). The band toured the UK in November to support the new release, and Europe and Japan followed in 2009.

In a never ending quest for new recording experiences, the band decided not to return to Spain, where they recorded their last LP (Robert Johnson’s Tombstone), instead opting for a seriously old castle in the west of England. Like you do…

Danny Bowes says “We’ve known Marge the owner for years, and always felt her castle would make a great studio, but it was only last year that we decided to see if we were right. She loved the idea, so we dipped a toe in the water by shipping our recording kit down there for a few days, just to try it out with some guitar overdubs and percussion. It was perfect, with 2 foot thick stone walls, and loads of different rooms to choose from, everything sounded brilliant. It was a no brainer, we had do the whole album there, so we invaded the place, recorded 20 + songs, and stayed for 3 months. Marge loved it, and she got on the record too!”

Luke Morley says “We’ve always made our best albums in a rural, English setting so Walton Castle was the perfect location for us. We had cables and wires running everywhere but it was definitely worth it, as it’s the best sounding album we’ve ever made. I knew we had a great batch of songs so it was a question of giving ourselves the best possible circumstances to bring them all to fruition, and we definitely function better when we’re having fun. We moved in, set up our studio, frightened the local wildlife and befriended the local landlords (who were inconsolable when we moved out), as were the better looking sheep in the neighbouring field, well that’s what Harry said anyway...”

The resulting record is a great collection of songs, assembled and delivered in the way only Thunder know how. 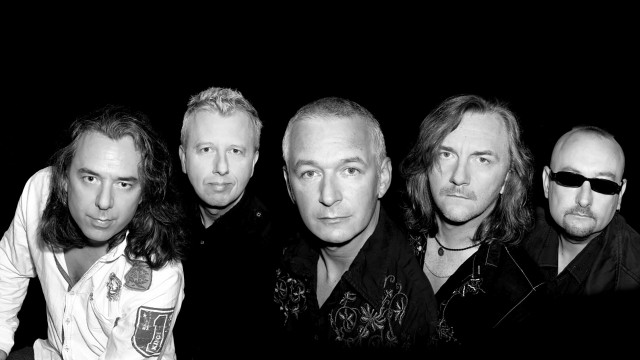 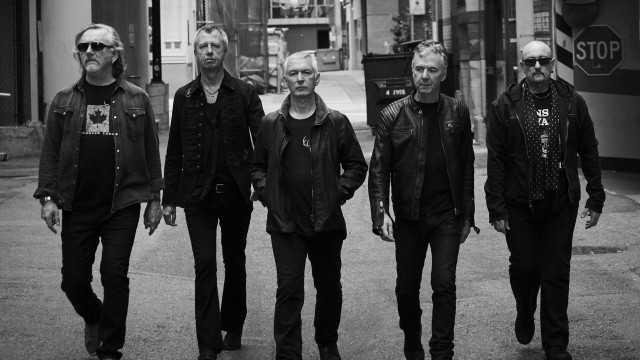 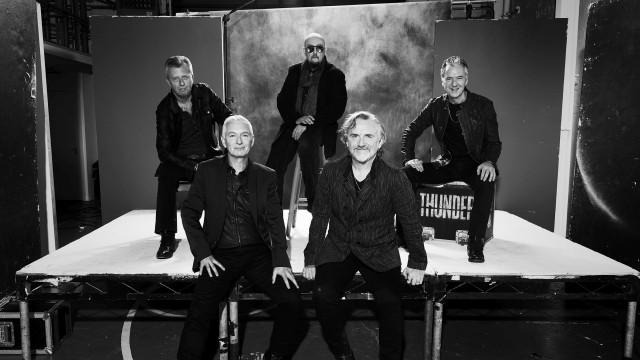 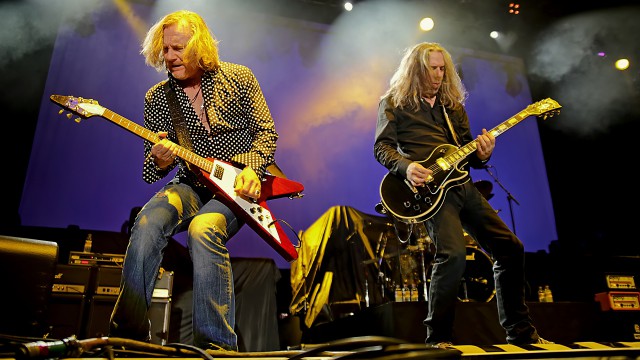