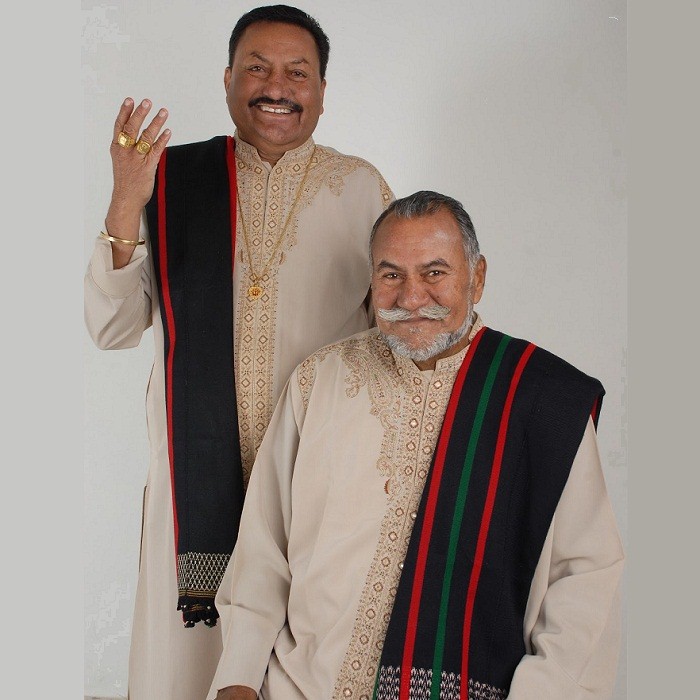 The Wadali Brothers (Puranchand Wadali & Pyarelal Wadali) are Sufi singers and musicians from Guru ki Wadali in the Amritsar District in Punjab, India. Born into the fifth generation of musicians given to singing the messages of Sufi saints, the Wadali brothers dabbled in the most unexpected of professions before swaras (Music notes) became their religion. While Puranchand Wadali, the elder brother, was a regular in an akharas(wresting houses) for a good 25 years, Pyarelal, the younger one, contributed to the meager family income by playing the role of Krishna in the village rasleela. Wadlali's father Thakur Das forced Puranchand in to music and later Puranchand went to pick up his music lessons from celebrated masters like Pt Durga Das and Ustad Bade Ghulam Ali Saheb of Patiala Gharana. Payarelal was trained by his elder brother whom he considers his mentor and guru even today. Their first musical performance outside their village was in Harballabh Temple in Jalandhar. The duo went to Jalandhar to perform in Harballabh Sangeet Sammelan but was not allowed to sing due to their appearance. Disappointed they decided to make a musical offering at the Harballabh temple, where an executive of All India Radio, Jalandhar, spotted them and recorded their first song. Wadli's sing in qawwali, gurbani, kaafi, ghazal, bhajans and Sufiana forms of music. They live in their ancestral house in Guru Di Wadali and teach music to those who promise to preserve it. They do not charge their disciples and lead a very simple life devoted to the divine one. They believe in Sufi tradition deeply. They consider themselves as mediums through which the preaching of great saints has to be passed on to others. They have never indulged commercially and they have only a handful of recording to their name. They believe in singing freely as homage to the divine one. They both do not feel very comfotable in using electronic gadgets in their music and stress on Alaap and Taans. They believe that spiritual heights can only be attained if you sing unreservedly, in a free atmosphere. Recently they stepped into the world of films with Pinjar in which they have added divine dimensions to the pain of Partition, by rendering music director and writer Gulzar's soulful lyrics in their "mystical" style. Also on cards is a documentary, which the Discovery Channel is planning to make on them. they are very near to god and one can never even imagine of compairing their singing with any other singer or artist. they are a class apart and their simplicity and down to erarth nature still stand tall among the modern day trends of jazz, pop, club mixes and semi nude videos. you feel totally lost when you listen to such a divine voice. and to top all they never demand for attention, you never see them spending lavishly. briefly, they are the most genuine human beings in the field of music. we are happy that they have brought lakhwinder into this field who is also very talented and we can expect some good music for the coming few decades.GOD BLESS THEM. (from wikipedia, http://en.wikipedia.org/wiki/Wadali_brothers)