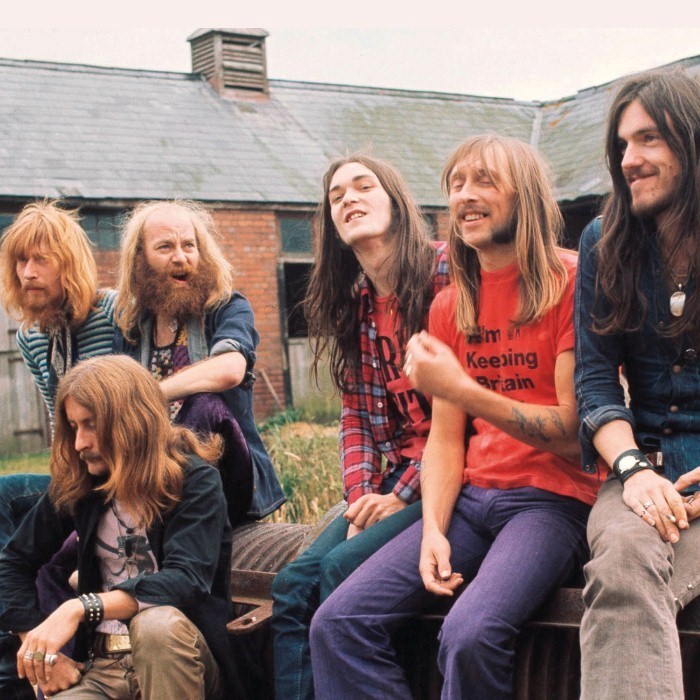 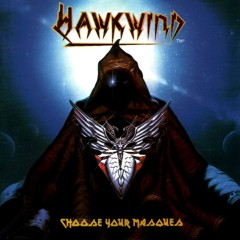 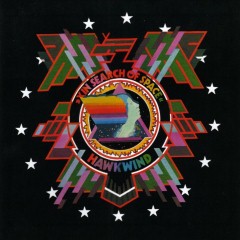 Hawkwind is an English rock band and one of the earliest space rock groups. The band was formed by ex-busker and blues man Dave Brock in Ladbroke Grove, England, who intended to marry simple three-chord rock with experimental electronic music. He cites his influences for the band at the time as The Moody Blues, Steve Miller Band and the krautrock scene of Kraftwerk, Neu! and particularly Can.

The band was formed in 1969 by visionary Dave Brock and although it has been subject to numerous line-up changes it is still led by him. The early line-up featured Dave Brock on vocals and rhythm guitar, Huw Lloyd-Langton on lead guitar, Terry Ollis on drums, Thomas Crimble on bass, Nik Turner on Saxophone and Dik Mik on synthesizer.

The band became established as a space-rock underground band with their renowned concert at the Glastonbury Rock Festival 1970 when they set up in an alternative field and played a free concert, pulling crowds away from the main event. Their debut album, the self titled ‘HAWKWIND’, was released by EMI and to this day still sells steadily. In 1970 they appeared at the Isle of Wight Festival where Jimi Hendrix was spotted in the audience. He was asked to get up and join the band and he replied ‘No I don’t want to spoil it!’ Huw Lloyd-Langton remained with them until late 1971. The band shot to fame in 1972 with their hit record ‘Silver Machine’ featuring Lemmy (now of Motörhead fame) on vocals. (This record featured in the soundtrack of a recent TV Mazda advert in the UK). In 1973 Simon House (Electric Violin) joined, and throughout the 70s, 80s and 90s, the renowned World famous Sci-fi author, Michael Moorcock often recorded and appeared with them.

Lemmy left the band in 1975 after a drugs bust in USA, and went on to form ‘MOTORHEAD’. Huw Lloyd-Langton joined Leo Sayer in 1974 and then in 1975 went on to form supergroup ‘WIDOWMAKER’ WITH Steve Ellis (Love Affair), Luther Grosvenor (Mott The Hoople), Paul Nicholls (Lindisfarne) and Bob Daisley (Ozzy Osborne). In 1977, Simon House joined David Bowie. Dave Brock and poet Bob Calvert tour as ‘HAWKLORDS’, performing the stage show ‘METROPOLIS’. Throughout the 70’s, Hawkwind released a series of classic albums; ‘IN SEARCH OF SPACE’, ‘DOREMI FASOL LATIDO’, ‘SPACE RITUAL’,
‘HALL OF THE MOUNTAIN GRILL’, ‘WARRIOR ON THE EDGE OF TIME’, ‘ASTOUNDING SOUNDS, AMAZING MUSIC’, ‘QUARK STRANGENESS & CHARM’ and ‘PXR 5’. In 1979, Dave formed another nucleus with Huw Lloyd-Langton on lead guitar, Simon King on drums, Harvey Bainbridge (from Hawklords) on bass and Tim Blake from ‘Gong’ on keyboards.

Their live album ‘LIVE 79’ went straight into the national top ten charts chart. In 1980 Ginger Baker replaced Simon King on drums and they recorded their classic album ‘LEVITATION’. Once again, the release went straight into national top ten album chart. Tim Blake and Ginger Baker remaied with the band until after the Christmas Tour 1980. From 1979 to 1985 the band’s singles and albums were never out of the national, independent and heavy metal charts, with albums such as ‘SONIC ATTACK, ‘CHURCH OF HAWKWIND’, ‘CHRONICLE OF THE BLACK SWORD, ‘LIVE CHRONICLES’ AND ‘XENON CODEX’. Nik Turner who left the band in 1975 briefly rejoined the band 1982-1983 for the ‘CHOOSE YOUR MASQUES’ tour. In 1984 Alan Davey replaces Harvey Bainbridge on bass and Harvey moved over to keyboards and synths. In 1985 the band tour with the spectacular ‘CHRONICLES OF THE BLACK SWORD’, a stageshow portraying music and images based on Michael Moorcock’s epic saga, ‘ELRIC’. During this period the band reached a new audience with the emergence of ambient acts such as The Orb openly acknowledging Hawkwind’s influence.

Huw Lloyd-Langton remained with the band throughout the end of the 80s, departing in 1989 followed
shortly after by Harvey Bainbridge. The band continued to perform live throughout the nineties, and had
some noteable album releases such as, ‘SPACE BANDITS’, ‘PALACE SPRINGS’, ‘ELECTRIC TEPEE’,
‘IT IS THE BUSINESS OF THE FUTURE TO BE DANGEROUS’, ‘THE BUSINESS TRIP’, ‘ALIEN 4’,
‘LOVE IN SPACE’ and ‘DISTANT HORIZONS’. During their entire existence the band have performed numerous free concerts, notably STONEHENGE and have supported various charities, which include SHELTER, when in 1977 at the Blackheath Concert Halls they raised thousands of pounds for the homeless, and even released a charity single version of the Rolling Stones’ “Gimme Shelter” with Samantha Fox guesting on vocals. N.A.S.A. in the USA have also used sound tracks from the ‘LOVE IN SPACE release. In 1997 they headlined the ‘1ST SPACEROCK FESTIVAL USA’. In 2000, the band staged the highly successful ‘HAWKESTRA’ event at the London Brixton Academy, which saw many past members reunited on stage with a nucleus of Dave Brock, Ron Tree, Jerry Richards, Hugh Lloyd-Langton, Simon House, Richard Chadwick, Alan Davey and Tim Blake. In 2001 they were voted the 8th top progressive band in the country on Channel 4 TV. The band have recently released a double live cd recording of their Xmas 2000 ‘Yule Ritual’ show at the London Astoria, as well as the Arthur Brown helmed ‘Out of the Shadows’ in 2007.The concept of a Hawkestra, a reunion event featuring appearances from all past and present members, had originally been intended to coincide with the band’s 30th anniversary and the release of the career spanning Epocheclipse – 30 Year Anthology set, but logistical problems delayed it until 21 October 2000. It took place at the Brixton Academy with about 20 members taking part in a 3+ hour set which was filmed and recorded. Guests included Samantha Fox who sang Master of the Universe. However, arguments and disputes over financial recompense and musical input resulted in the prospect of the event being restaged unlikely, and any album or DVD release being indefinitely shelved.The Hawkestra had set a template for Brock to assemble a core band of Tree, Brock, Richards, Davey, Chadwick and for the use of former members as guests on live shows and studio recordings. The 2000 Christmas Astoria show was recorded with contributions from House, Blake, Rizz, Moorcock, Jez Huggett and Keith Kniveton and released as Yule Ritual the following year.

In 2001, Davey agreed to rejoin the band permanently, but only afiter the departure of Tree and Richards.
Meanwhile, having rekindled relationships with old friends at the Hawkestra, Turner organised further Hawkestra gigs resulting in the formation of xhawkwind.com, a band consisting mainly of ex-Hawkwind members and playing old Hawkwind songs. An appearance at Guilfest in 2002 led to confusion as to whether this actually was Hawkwind, sufficiently irking Brock into taking legal action to prohibit Turner from trading under the name Hawkwind. Turner lost the case and the band now perform as Space Ritual.
An appearance at the Canterbury Sound Festival in August 2001, resulting in another live album Canterbury Fayre 2001, saw guest appearances from Lloyd-Langton, House, Kniveton with Arthur Brown on “Silver Machine”. The band organised the first of their own weekend festivals, named Hawkfest, in Devon in the summer of 2002. Brown joined the band in 2002 for a Winter tour which featured some Kingdom Come songs and saw appearances from Blake and Lloyd-Langton, the Newcastle show being released on DVD as Out of the Shadows and the London show on CD as Spaced Out in London.
In 2005 the long anticipated new album Take Me to Your Leader was released. Recorded by the core band of Brock/Davey/Chadwick, contributors included new keyboardist Jason Stuart, Arthur Brown, tabloid writer and TV personality Matthew Wright, 1970s New Wave singer Lene Lovich, Simon House and Jez Huggett. This was followed in 2006 by the CD/DVD disc Take Me to Your Future.

The band were the subject of an hour-long television documentary entitled Hawkwind: Do Not Panic that aired on BBC Four as part of the Originals series. It was broadcast on 30 March 2007 and repeated on 10 August 2007. Although Brock participated in its making he did not appear in the programme, it is alleged that he requested all footage of himself be removed after he was denied any artistic control over the documentary… In one of the documentary’s opening narratives regarding Brock, it is stated that he declined to be interviewed for the programme because of Nik Turner’s involvement, indicating that the two men have still not been reconciled over the xhawkwind.com incident.

June 2007 saw the departure of Alan Davey, who left to perform and record with two new bands: Gunslinger and Thunor. He was replaced by “Mr Dibs”, a long-standing member of the road crew and bassist for the bands Spacehead and Krel (who had supported Hawkwind during 1992). The band performed at their annual Hawkfest festival and headlined the US festival NEARfest and played gigs in PA and NY. At the end of 2007, Tim Blake once again joined the band filling the lead role playing keyboards and theremin. The band played 5 Christmas dates, the London show being released as an audio CD and video DVD under the title Knights of Space. 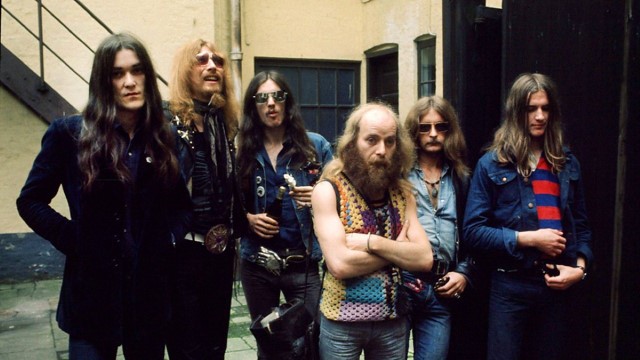 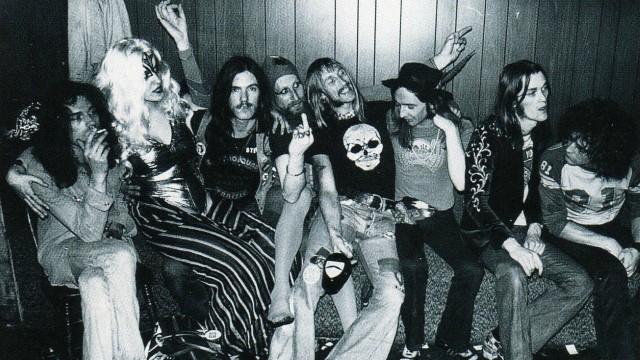 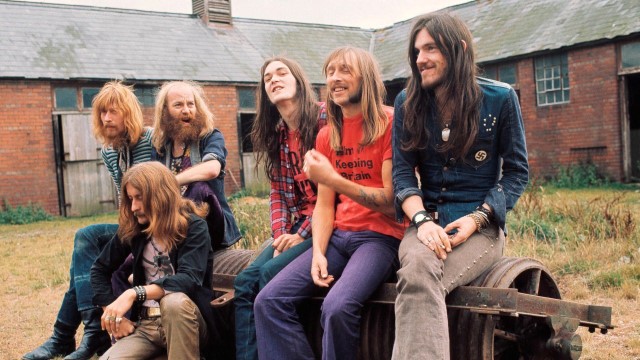