Everything I Didn't Say 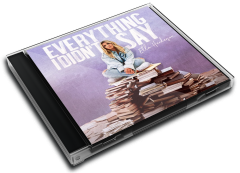 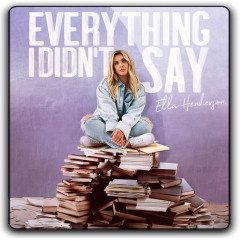 Everything I Didn't Say is the second studio album by British singer-songwriter Ella Henderson. It was released on 11 March 2022 by Major Tom's and Asylum Records, marking Henderson's first full-length album with the label and first album since her 2014 debut Chapter One. Everything I Didn't Say was recorded between 2016 and 2021, and the songs cover themes of love, heartbreak, mental health and self discovery against a backdrop of both electronic and traditional instruments.

English singer and songwriter Tom Grennan and American singer and songwriter Mikky Ekko are featured on the album, along with production and co-writes from James Arthur, TMS, Fred Ball, Al Shux and Richard "Biff" Stannard amongst others. The album was preceded by the release of singles "Let's Go Home Together" (with Grennan) and "Brave", as well as the title track, which was released as a promotional single in countdown to the album's release. Henderson will support the album with an eight-date UK concert tour across October 2022.

Background and production
In April 2015 it was revealed that Danny O'Donoghue, lead singer of Irish band the Script, would be recording music with Henderson. This took place less than a year after debut album Chapter One topped the UK Albums Chart and spawned the single "Ghost", which also topped the UK Singles Chart for four weeks and achieved international success. During an interview with the Official Charts Company's George Griffiths, Henderson revealed why there was a big gap between her first and second albums: "So much happened to me when I was 16. I put an album out when I was 18. I had the levels of success I had , and I was touring and promoting for so long, when I hit my 20s I realised I didn't know where home was. I didn't have a couch, I couldn't drive. I needed to live, which is one of the reasons why I took a step back." Henderson also spoke about crippling anxiety, which included being hospitalised after suffering a panic attack. She told the Evening Standard that she could not release her original iteration of her second album, "I was so lost in terms of who I was as a person that I wasn't ready to release it."

Despite a second album being in production as far back as 2016, in 2018 it was revealed that Henderson had departed ways with her record label Syco Records. The decision was reported by the media to have been mutual, stating that both artist and label "felt that a change of direction was needed for everyone after the gap between the release of the first album and as-yet unreleased follow-up". It was later revealed, that Henderson and Syco actually parted ways in 2017 amidst plans for new music. Henderson would subsequently go on to sign a new deal in 2018 with Major Tom's, a record label owned by British drum and bass band Rudimental and aligned with Asylum Records. At the time, Henderson had been touring with Rudimental which included two sold-out shows at Alexandra Palace. Speaking on the deal, she said:
"I'm so happy and excited to have signed with an amazing group of artists, musicians, producers and friends. I have been so welcomed over recent months and I am so excited to become a new member of the Major Toms / Asylum family! Rudimental ... have huge hearts and care about the wider community, people and their fans. Having the boys involved in this next chapter of my musical journey makes me SOOOO excited for what's to come!

— Henderson interview with the Official Charts Company
Title and artwork
During production for Everything I Didn't Say an alternative title of Chapter Two was considered; it would have made Henderson's second album a direct continuation and sequel to her debut album, Chapter One (2014). During an interview in the run up to the release of the album, Henderson told the Official Charts Company why she decided against the sequential titles, saying "I wrote Chapter One in 18 months when I was a teenager. This isn't just Chapter Two. This is a whole book! I didn't want to trap myself . I'd be releasing Chapter 85 in my 80s, and no-one wants to see that." British HMV stores carried an exclusive version of the album with an altered artwork; the HMV version features a pink and orange blush background as opposed to the purple background on standard versions of the album.

Music and lyrics
Everything I Didn't Say is a pop album with elements of country pop, electropop and soul, combining both electronic and traditional instrumentation such as piano and guitar riffs. According to Henderson, she wrote nearly 400 songs for the album and wanted to compose a diary-like track listing, with each song telling a story and "different part" of her life. Everything I Didn't Say explores themes of Henderson's own mental health struggles and the time taken between her first and second album, as well as heartbreak, love and self-worth. Some of the songs from the original studio sessions for a second album under Syco included "Let's Go Home Together" and "Ugly"; these were subsequently brought across for inclusion on Henderson's album after both had been performed for fans on various tours.

The album opens with the song "Emotions", an upbeat electropop song written by Henderson and Jordan Riley, with the latter also producing the song. Riley would produce and co-write several other songs on the album. Its energetic vibe was described as "setting the tone for Henderson's return to music". Some of the lyrics have a sad tone, such as the chorus "I'm sick of my emotions" and subsequent lyrics "It's okay not to be okay". This latter lyric was compared to the current "self-care climate" in music, drawing similarities to the song "OK (Anxiety Anthem)" by Mabel (2019) and "OK Not to Be OK", a 2020 collaboration between Marshmello and Demi Lovato. "Emotions" and the song "Out of My Head" are two of the up-tempo moments on the album. Henderson described "Out of My Head" as one of her favourite songs on the album as it dealt with themes of narcissism and needing to write about one of the biggest narcissists she had met.

A man in a black t-shirt and open black leather jacket with mid-length auburn hair and an earring in his left ear poses for the camera
A topless man performs on stage with a microphone and one arm in the air
James Arthur (left) who appeared on series nine of The X Factor co-wrote "Let's Go Home Together" with Henderson. Tom Grennan (right) would re-record vocals for the song to be a duet between Grennan and Henderson.
"Let's Go Home Together" was co-written by fellow The X Factor series nine contestant James Arthur. Originally envisioned as a duet between Arthur and Henderson, the song would go on to be re-recorded by Henderson and Tom Grennan. Of the new version of the song, included on Everything I Didn't Say, Henderson said "When we released it, it was a time when everyone just missed going to the pub, you know? It helped remind people that we would be together again and you can actually meet someone in a bar and take them home. Seeing that song resonate felt good, I'm going to lie. I had it with me for such a long time!".

"Brave" has lyrics that speak of "shaking the stigma of needing help and embracing someone’s support for you when you need them most". The song "Set in Stone" includes the lyric "If we lose ourselves at some point, those memories are set in stone", and written in the UK during a writer's camp. It was inspired by the producer's personal loss (losing their uncle). Of the song, Henderson said, "we always assume that everything is forever until it comes to an end. We have no control over the end, but what we can control is the present. So we should enjoy every minute we have together and get the most out of it."

The song "Ugly" was inspired by an experience Henderson had on holiday and was described as therapeutic for the singer. Having performed the song during live tours, Henderson felt that fans had expected to hear it on a future album and hence it was included on Everything I Didn't Say. Of the song, she said "that came from a situation where I'd gone on a holiday abroad and someone had taken horrible pictures of me. I came home and just stayed in my flat. That song was like a form of therapy for me, it really helped me grow so that had to be on the album". The song sees Henderson singing about embracing her own flaws. Other themes explored on the song include "trying to fit in" and being unique.

"Thank You for the Hell", another co-write and production by Riley, is influenced by country pop and tells the story of a situation Henderson went through, reliving all the emotions and toxicness. During an interview with The Rebecca Judd Show on Apple Music, Henderson said of the song, "And this song is when you have gone through the hurt, you've gone through the pain, you've gone through the anger and all these emotions." It discusses the silver lining and Henderson's gratefulness for the situation as it helped her to become the person she is today. Songs like "Brave" and "Cry On Me" focus on themes of "I Will Survive" (akin to the Gloria Gaynor song of the same name).

Marketing and promotion
In January, Henderson made an appearance on Kent radio station, kmfm to promote the song "Brave" and album. Henderson was also invited aboard Virgin Voyages' new cruiser liner, performing a set in support of the travel operator's newest ship on 25 February 2022. On 16 March 2022, Henderson joined Jess Iszatt for a conversation about the making of Everything I Didn't Say on Iszatt's show The Record Club. During the programme, Henderson also answered live questions from fans. Henderson appeared on BBC Radio 2's Piano Room over the weekend of 12–13 March 2022.

In February 2022, Henderson announced her first headline tour in seven years, in support of Everything I Didn't Say. The tour was confirmed to visit eight venues around the UK. Although it is only planned for the tour to visit the UK, Henderson expressed a desire to take the album on tour across Europe and the rest of the world.