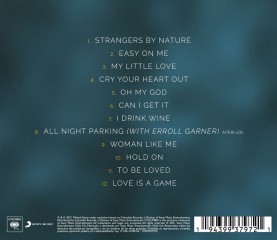 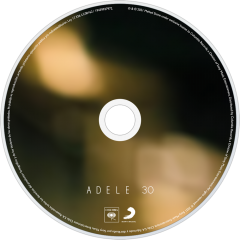 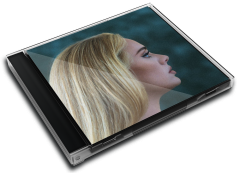 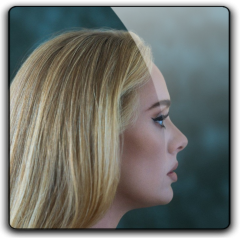 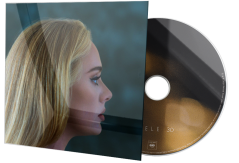 30 is the fourth studio album by English singer-songwriter Adele, released on 19 November 2021 by Melted Stone and Columbia Records. Inspired by her divorce from ex-husband Simon Konecki, Adele tackles the separation on the album, whilst discussing her motherhood and the scrutiny of fame. She wrote the album between 2018 and 2021 with various producers, including Greg Kurstin, Tobias Jesso Jr., Max Martin and Shellback, all of whom she worked with on her previous record, 25 (2015); new collaborators on 30 include Ludwig Göransson, and Inflo of the English band Sault.

The lead single, "Easy on Me", was released on 15 October 2021 to international success. 30 has been advertised using an extensive promotional campaign, which included a CBS concert special titled Adele One Night Only featuring an interview segment by American talk show host Oprah Winfrey, on 14 November 2021, followed by an ITV concert special titled An Audience with Adele on 21 November 2021, and two British Summer Time Hyde Park concerts scheduled for 1–2 July 2022 as well. 30 received acclaim from music critics, who commended its cinematic instrumentation and strong vocal performances. It was described as a pop, jazz and soul album focusing on romantic but melancholic themes of heartache, acceptance, and hope.

Background
In 2018, mainstream media outlets reported that Adele was working on her fourth studio album. On 5 May 2019, her 31st birthday, Adele posted several black-and-white pictures of herself on her Instagram account celebrating the occasion, along with a message reflecting on the preceding year. The message ended with, "30 will be a drum n bass record to spite you". Media outlets took the post as an indication for the arrival of a new album from Adele.

On 15 February 2020, Adele announced at a friend's wedding that her fourth studio album would be out by September 2020. However, she would later confirm that the album's production and release had been delayed due to the COVID-19 pandemic. In January 2021, Adele divorced Simon Konecki, her then-husband and father to her son. In an interview with Vogue published in October 2021, Adele stated that 30 was inspired by her separation from Konecki, the scrutiny of fame and her motherhood.

Marketing
Announcement
Starting on 1 October 2021, billboards and light displays carrying the number "30" started appearing around the world, such as at popular spots like Buckingham Palace, the Eiffel Tower, the Empire State Building, the Colosseum and the Louvre, fueling widespread speculation that Adele would be returning with her fourth album, 30. On 4 October 2021, Adele changed all her social media profile images to a navy blue photo and also updated her website to match with a brand new logo. The following day, Adele announced that the lead single, "Easy on Me", would be released on 15 October 2021. The song topped the charts in 23 countries, including the UK Singles and the US Billboard Hot 100 charts.

Promotion and release
In October 2021, Adele became the first person to simultaneously appear the same month on covers of American and British editions of Vogue, both of which featured separate photoshoots for the magazines, and interviews on the new album. On 13 October 2021, Adele revealed the album via social media, confirming both the title 30 and the release date of 19 November 2021. The next day, the album was made available for pre-order in CD, digital, LP (two black vinyl discs), and cassette formats on Adele's website. 30 is Adele's first release not under her previous label XL Recordings; instead, it was released by her label Melted Stone, with worldwide distribution on Columbia Records (previously only handling distribution of Adele's catalogue in North America). Vogue's "73 Questions" video interview segment featuring Adele was released online on 21 October 2021. The track-listing of 30 was revealed on 1 November 2021. The Target-exclusive deluxe edition adds two bonus tracks and a duet version of "Easy on Me" with American singer-songwriter Chris Stapleton.

On 4 November, two weeks prior to the album release, Consequence reported that "a major delay in vinyl production" was caused due in part to 30. In a 3 November report, Variety had stated that Adele had to turn the album in six months beforehand in order to have its vinyl LPs ready for 19 November, the day it releases. More than half a million vinyl copies of 30 were manufactured in the months leading up to the release day, with Sony Music removing catalog albums from its overseas pressing plants to ensure "there won't be any shortage of Adele LPs going into the holidays", which coupled with the pre-existing delay in production due to the COVID-19 pandemic, became detrimental to albums by other artists. Ed Sheeran stated "there's like three vinyl factories in the world, so you have to do it like really upfront—and Adele had basically booked out all the vinyl factories, so we had to get a slot and get our album in there. It was like me, Coldplay, Adele, Taylor, ABBA, Elton, all of us were trying to get our vinyls printed at the same time."

Concerts
As part of the promotion in the US, on 18 October 2021, CBS announced Adele One Night Only, a two-hour concert and television show by Adele, featuring an interview segment with American talk show host Oprah Winfrey; the special was shot at Griffith Observatory in Los Angeles, and aired on 14 November 2021. For the UK, another concert special called An Audience with Adele will air on 21 November via the free-to-air channel ITV, and will released to its on-demand platform ITV Hub; the one-off concert was captured at the London Palladium in London, and will an audience consisting of both fans and Adele's "own personal heroes and heroines, fellow musicians, artists, actors, sportsmen, sportswomen and more." Adele is also slated to play two concerts at British Summer Time Hyde Park, London, on 1–2 July 2022. Tickets were made available on 26 October 2021 on Adele's website and via American Express. Its "extortionate" ticket prices was met with criticism from many fans online, with the lowest possible price costing £90 and the highest being £579.95.

User Album Review
A mythology surrounds Adele, and trying to quantify the sheer scale of her popularity can make you feel a little dizzy. A year after its release a decade ago, one in six UK households owned a copy of her stratospheric ‘21’ – the record which made her one of the best-selling artists in musical history. At this point, even mind-boggling success feels like a given, and meanwhile, her music can sometimes feel too familiar. When ‘25’ presented a relatively safe selection of cast-iron ballads six years ago, it’s safe to say that nobody was particularly surprised. Last month, the belting break-up song ‘Easy On Me’ felt like more of the same: a hulking great heartbreak ballad backed by pounding piano. “Adele has returned with a reassuring slice of classic Adele balladry,” we wrote at the time.

It turns out that song was a red herring, because if you’re heading into ‘30’ with a clearly-defined sense of what to expect, prepare to be pleasantly surprised. Lead single ‘Easy on Me’ along with ‘Hold On’ and ‘To Be Loved’ are really the only tracks here that feel remotely like classic Adele. Though soul, jazz, and blues are hardly new influences for the Tottenham singer, who has built a record-smashing career on retooling retro sounds for contemporary pop, they feel much rawer here, bolstered by show-tuney strings arrangements, gospel, and a sample from the late jazz pianist Erroll Garner on the glimmering ‘All Night Parking’. The helium-charged ‘Oh My God’ and uneasy rolling guitars of ‘Woman Like Me’ both recall the enigmatic UK group SAULT. Perhaps it’s no surprise that their leader, Inflo, produced three of ‘30’s strongest tracks; and as a whole the line-up of collaborators on ‘30’ feels like a departure. As well as more familiar faces like Greg Kurstin and Max Martin, she’s also worked with rock heavyweight Shawn Everett [The War on Drugs, The Killers], and Swedish composer Ludwig Göransson [Tenet, Black Panther].

The first time we hear Adele’s unmistakable vocals on cinematic opener ‘Strangers By Nature’ it’s treated with a static fuzz. “I’ll be taking flowers to the cemetery of my heart,” she sings as doubled-up discordant vocals morph into sweeping, vintage-Disney grandeur, “for all of my loves in the present and in the dark.” Setting the tone for ‘30’ as a whole, it feels distinctly unlike anything she has done before; while Adele’s music is often charged with intense emotional sincerity, there’s an old-timey campiness here that seems intentional, and its brightly trilling strings recall the likes of Judy Garland and Gene Kelly.

Making frequent use of voice notes – an idea Adele says she borrowed from Skepta and Tyler, The Creator – ‘My Little Love’ is equally surprising, morphing flecks of Golden Age jazz with contemporary beats as the singer attempts to explain her feelings after splitting from her ex-husband Simon Konecki. “I feel a little bit confused and like I don’t really know what I’m doing,” she tells their son Angelo in one voice note. On ‘To Be Loved’, produced by Shawn Everett and previous collaborator Tobias Jesso Jr, Adele pours out a staggering vocal which brings to mind Whitney Houston epics like ‘All At Once’. The production sounds so warm, you can almost feel the velvety hammers of the keys.

Elsewhere, ‘30’s new direction is more puzzling. ‘Hold On’ – produced by Little Simz and Michael Kiwanuka collaborator Inflo – could be a stand-out until the arrival of schmaltzy, theatre-pit drums leave the latter section feeling like the final wedding scene of a panto. The piano-led ‘I Drink Wine’ has early promise with its knowing wink of a title and gospel influences, but suffers from a similar fate as cheesy-sounding percussion transforms it into Savvy B: The Musical. The raucous acoustic strums and bright, Sam Fender-ish energy of ‘Can I Get It’ is initially intriguing – Adele does indie rock, anyone? – but it’s jarringly derailed by a lone whistling pop hook.

Though this is her most creative record to date, the lyrics stick to safer territory. It is fun hearing her be more playful (“Let me just come…” she belts out on ‘Can I Get It’ leaving a mischievous pause, “and get it”) but there are plenty of cliches, too. “Oh I hope in time we will both find peace of mind,” she sings on ‘I Drink Wine’, “sometimes the road less travelled is a road best left behind.” Not always the case, it turns out.

Ahead of releasing ‘30’ Adele jokingly told fans to expect an album about “divorce, babe”. And though cartoon birds seem to flutter around the newly-infatuated windows of ‘All Night Parking’ – one of its lone love songs – this is largely a record about a divorce of kinds. Namely, trying to separate out the strands of herself again after a life-altering break-up. Though there are glimmers of hope in places, it doesn’t prevail. “No amount of love can keep me satisfied,” she sings on the gut-wrenchingly pessimistic closer ‘Love is a Game’. “Heartache, it’s inevitable,” she shrugs elsewhere, “but I’m no good at doing it well, not that I care.”

This devastating level of honesty means that, despite its more experimental moments, ‘30’ still winds up feeling like trademark Adele, in its own way, most of the time. And after fair accusations of playing it safe musically in the past, it’s refreshing to see the pop titan treading braver territory – even if the hit-rate isn’t 100 per cent.