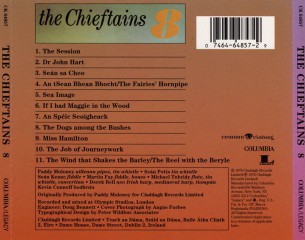 The Chieftains 8 is an album by The Chieftains. Originally recorded for Claddagh Records and released in 1978, it was re-released on Columbia Records. It is the last of the group's albums recorded before members Seán Potts and Michael Tubridy left the band. The band performed "If I Had Maggie In The Wood" on Saturday Night Live in March 1979.
(Wikipedia)