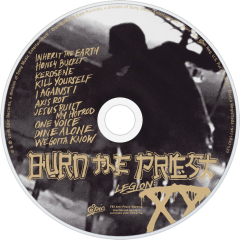 Legion: XX is a cover album by American heavy metal band Lamb of God, under their original name Burn the Priest. The album was released on May 18, 2018 through Epic Records/Nuclear Blast. It is the band's first album as Burn the Priest since their 1999 album. It is the last album to feature founding drummer Chris Adler before his departure from Lamb of God in July 2019.