Anth’f***in’ology: The Gospel According to... 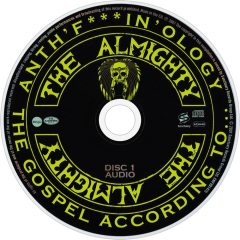 The classic lineup (Ricky, Stump, Floyd and Pete) reformed for benefit shows in January 2006 and then appeared at the 2006 Bulldog Bash. They undertook a short five show tour at the end of December 2006. In 2007, the band released their second compilation album, Anth F***in'ology - the Gospel According to The Almighty, covering their entire career and including a DVD of all their promo videos to date.