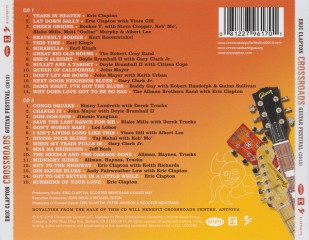 Crossroads Guitar Festival 2013 is a music DVD, concert film and eleventh live album by the British rock musician Eric Clapton and was released on November 18, 2013 through Warner Bros. Records. It features recordings by various artists that performed during the Crossroads Guitar Festival 2013. The release reached international album, DVD and Blu-ray charts and was certified by various organisations with gold and platinum awards.
(Wikipedia)