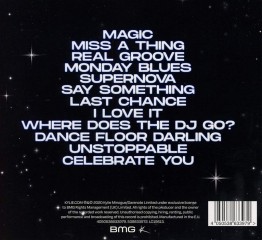 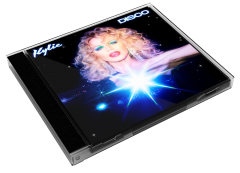 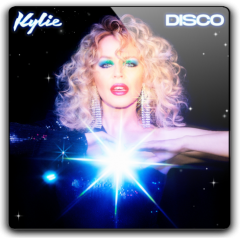 Disco (stylized in all caps) is the fifteenth studio album by Australian singer Kylie Minogue, released on 6 November 2020 by Darenote and BMG Rights Management. A departure from her previous country-influenced album Golden (2018), it is influenced by 1970s and 1980s disco along with modern-day club music. The lead single from the album, "Say Something", was released on 23 July of the same year and premiered on BBC Radio 2. The song received acclaim from music critics. The second single, "Magic", was released on 24 September, to positive reception, while a promotional song, "I Love It", was released a month later, on 23 October.

Background
Minogue released her fourteenth studio album, Golden in April 2018. The album was a country pop and dance-pop record and was commercially successful, debuting at number one in both the United Kingdom and her native Australia. Subsequently, it was certified gold in the former by the British Phonographic Industry (BPI). Minogue then released her fourth major greatest hits album, Step Back in Time: The Definitive Collection in June 2019, which also debuted at number one in the United Kingdom and Australia following a performance that attracted 3.9 million viewers at Glastonbury Festival, the most for any Glastonbury performance in history. She stated that she would like to create a "pop-disco album" and return to recording new material after the performance.

Minogue first began production on Disco in autumn 2019. When she first began work on the album, as with her previous studio album, she did not have a concept solidified. However, during her Golden Tour (2018–19) the setlist included a section influenced by Studio 54, which Minogue felt inspired by. Following her first few studio sessions and discussions with her A&R, she felt her creative direction was "heading straight back to the dance floor" and creating a disco influenced album.

Work continued on Disco during the COVID-19 pandemic in 2020, with Minogue using a home studio to record throughout lockdown. Alistair Norbury, president of Minogue's record label BMG, announced to industry title Music Week that Minogue was also learning to record and engineer her own vocals using music software Logic Pro in order to continue working apace during lockdown. Approximately 90% of the album was created via her home studio, with Minogue honing the album's theme of escapism during lockdown restrictions.

As with her previous studio album, as well with her 1997 DeCon album Impossible Princess, Minogue has also co-written all of the material herself. While she has written songs on every one of her albums since 1990, it is the first time she has engineered her own work.

Album Review
Last year’s utterly joyous Glastonbury set underlined her international treasure status, but that doesn’t mean it’s easy these days to make a satisfying Kylie album. Recruiting Pharrell Williams and Haim producer Ariel Rechtshaid to update her glossy dance-pop sound resulted in 2014’s ‘Kiss Me Once’: an often enjoyable but somewhat disjointed affair. But if you try something different, much like 2018’s country-flavoured ‘Golden’, you risk the complaint that “it just doesn’t sound like Kylie.”

The pop stalwart’s 15th studio album avoids both traps by embracing what Minogue has called “grown-up disco”: a terrific fit for this seasoned showgirl who’s been bringing out bops and bangers since the late ‘80s. ‘Dance Floor Darling’ has a delirious spoken word bit that recalls Minogue’s high-camp romp ‘Your Disco Needs You’, but elsewhere this album succeeds because it feels like Kylie doing disco in her own cute way: measured, affectionate and sincere, not an exercise in tongue-in-cheek pastiche.

Crucially, there’s enough variety here to keep things interesting. Echoes of Daft Punk’s modern disco classic ‘Random Access Memories’ illuminate ‘Miss A Thing’ and ‘Where Does The DJ Go?’. Current single ‘Magic’ is an exuberant, horn-fuelled romp that deserves to soundtrack a post-Covid roller disco, while the funky strut of ‘Real Groove’ wouldn’t sound out of place on Dua Lipa’s recent ‘Future Nostalgia’ album. The lyrics are generally as introspective as a pair of hotpants – gold, naturally – but definitely capture the giddy thrill of dancefloor abandon. “Nights are for having fun, summer’s for loving,” she sings on ‘Last Chance’. “Sometimes we fall in love, all of a sudden.” It’s a perfect Kylie couplet.

‘Disco’ has no disasters, only charming minor indiscretions. ‘Last Chance’ is perhaps a little too melodically similar to Abba’s ‘Voulez Vous’, while the living-for-the-weekend rush of ‘Monday Blues’ could feel cheesy if you haven’t downed a sambuca or two first. More often, Minogue and co-writers including longtime collaborator Richard “Biff” Stannard and Little Mix regular Maegan Cottone execute the “grown-up disco” concept with stylish self-assurance. When she sings “Can we all be as one again?” on ‘Say Something’ – a cosmic slow-burn with Bowie-esque guitar licks – it’s an elegant nod to pandemic ennui.

And on ‘Where Does The DJ Go?’, Minogue even wonders: “Where does the DJ go when the party’s over tonight?” No other pop star would be quite so considerate. The result is a consistently uplifting set that feels like Minogue’s best album since 2010’s ‘Aphrodite’. Her sister Dannii is rumoured to have claimed that “Minogues don’t sweat”. In that case, let’s say that ‘Disco’ shimmers with a warm glittery glow that’s just irresistible.