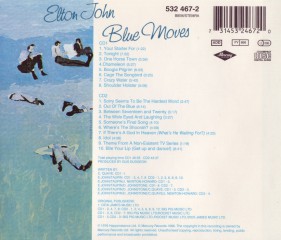 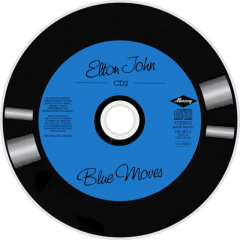 Blue Moves is the eleventh studio album by British singer/songwriter Elton John, released in on 22 October 1976. It was also his second double album (after Goodbye Yellow Brick Road), and his first album released by his own Rocket Records Ltd. While giving a concert at Wembley Arena to promote the album, John spontaneously announced "That's it, this is the last one." He didn't say for how long, but he was serious and temporarily left the touring/live performing scene. Kenny Passerelli, Caleb Quaye, James Newton-Howard and Roger Pope left the band after this. Only Davey Johnstone and Ray Cooper remained for John's next album, A Single Man.

Despite the album's darker tone and experimental song lineup, it has held up well with critics and in its initial release made it to #3 on the album charts, partly on the strength of the album's biggest hit single "Sorry Seems to Be the Hardest Word". (A single version of "Bite Your Lip (Get Up and Dance!)" also made it as a top 40 hit). John has played several songs from Blue Moves live. Versions of "Sorry Seems to Be the Hardest Word", "Bite Your Lip", "One Horse Town", "Tonight", and "Idol" have surfaced in various concert appearances through the years.

John has stated that Blue Moves is one of his favourite albums he has ever recorded. It was Gus Dudgeon's last album produced for almost a decade. The cover art for the album is from a painting by British artist Patrick Procktor. In the US, it was certified gold on 29 October and platinum on 9 December 1976 by the RIAA.

"Cage the Songbird" was a tribute to legendary French songstress Edith Piaf, and a year or so later was covered by Kiki Dee on an unreleased Rocket album, which finally was issued in 2008. ("Songbird" originated as part of the Rock of the Westies sessions, but wasn't completed during them, probably since the song's more acoustic, delicate sound didn't fit with the more rock 'n roll approach to the rest of the songs that made the Rock of the Westies final lineup.) The Beach Boys turned down "Chameleon", but members of the group (including Bruce Johnston and Toni Tennille) turned out to sing backing vocals on John's version. An excerpt from "Out of the Blue" was used for the closing titles on Top Gear up until the end of that Top Gear format (in 2001). This was one of two albums in which Davey Johnstone does not provide backing vocals; 1997's The Big Picture would be the other.