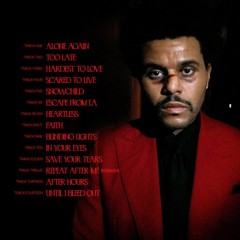 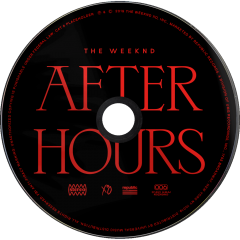 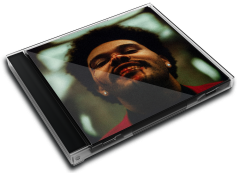 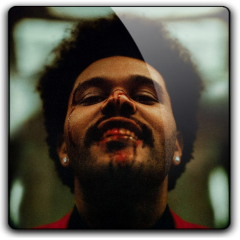 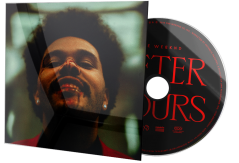 After Hours is the fourth studio album by Canadian singer The Weeknd. The album was released by XO and Republic Records on March 20, 2020. The project has been supported by three singles: "Heartless", "Blinding Lights", and "In Your Eyes". One promotional single has been released as well, the album's title track. It is The Weeknd's first studio album since 2016's Starboy, following the release of the 2018 EP My Dear Melancholy. The project is his first studio album to have no featured artists.

Background
The Weeknd first teased that he was working on a new album in November 2018, via a performance in which he told the crowd that "Chapter VI was coming soon." On January 12, 2019, Tesfaye then proceeded to further tease the project and its sound by tweeting "no more daytime music" to fans, making media outlets believe that he was set to continue the darker music found in My Dear Melancholy. Following a trio of collaborative singles throughout 2019, on August 6, he further reassured fans that he was working on his fourth studio album. Then after a five month period of silence, on November 24 the single "Blinding Lights" was revealed through a Mercedes-Benz television commercial, with reports of "Heartless" surfacing a day later. The latter song then premiered on the seventh episode of The Weeknd's Memento Mori Beats 1 radio show on November 27, 2019. Which in the hours leading into the release of the radio show episode, The Weeknd announced on social media his return to music with the captions "the fall starts tomorrow night" and "Tonight we start a new brain melting psychotic chapter! Let's go!". Both singles were met with critical and commercial success, with "Heartless" becoming his fourth number one on the US Billboard Hot 100 and "Blinding Lights" reaching number one in various countries worldwide. On February 13, 2020, The Weeknd revealed the title of the project "After Hours" through a 48 second teaser. A couple days after the announcement of the album's name, its release date of March 20, 2020, was shared through social media to accompany the title track's release as a promotional single. In the last week leading up to the album's release, After Hours' tracklist was revealed on March 17, 2020. On March 19, 2020, The Weeknd announced that the album is dedicated to long time fan and host of the popular XO Podcast, Lance, who died the night before. The album debuted alongside the eighth episode of Memento Mori on March 20, 2020, with The Weeknd also hosting a Spotify listening session upon its release.

Album Review
“I spend most of my days alone now,” The Weeknd said of his solitary, workaholic ways in a recent interview. “I don’t like to leave my house too much. It’s a gift and a curse but it helps me give undivided attention to my work… It distracts from the loneliness, I guess.” It’s a coincidence, certainly, but one very fitting that the first big album release of this period of global self-isolation should come from R&B’s foremost Abel Tesfaye. It’s a record free of features and full of probing self-reflection.

Tesfaye’s last release, the 2018 EP ‘My Dear Melancholy’ , signalled something of a sonic retreat, a stylistic U-turn back to the downtempo noir-pop of his early work. It followed chart-propelling dabbles with disco and funk-indebted electro, as the Canadian crooner transcended his initial cult-like status to make a surprisingly seamless crossover to the mainstream. Collaborating with the likes of Daft Punk, Lana Del Rey and Ed Sheeran, Tesfaye maintained his brooding and sleazy subject matter while scoring hits by pairing his signature falsetto to radio-friendly pop backdrops or upbeat nu-funk grooves.

Ahead of this new album release, The Weeknd promised “no more daytime music” and “a new brain melting psychotic chapter,” suggesting a much darker record than its immediate predecessor. But instead of opting for either arena-filling hits or the shadowy downtempo tunes of his early releases, Tesfaye instead switches between the two modes on ‘After Hours’, managing to produce his most all-encompassing record to date.

The jaunty ‘In Your Eyes’ (which comes with a euphoric, joyous and absolute killer sax solo) harks back to the sparkling bombast of 2016’s ‘Starboy’, while ‘Blinding Lights’ has the same kind of glossy, cinematic feel as the best bits of ‘Beauty Behind the Madness’. Lead single ‘Heartless’, a track admittedly a bit Weeknd-with-writer’s-block, makes sure there’s a club banger on offer, while ‘Snowchild’ is perhaps the most intimate we’ve heard Tesfaye sounding in a while. It’s a rare glimpse at Abel, the man, rather than his Weeknd persona.

Lyrically, it’s mostly what you’ve come to expect. Tesafye’s music has long been concerned with the cyclical ups and downs of hedonism (after all, the whole concept arc of his breakthrough mixtape trilogy was pretty much the highs and lows of the party and the after-party), and the comedown feeling continues on the appropriately-named ‘After Hours’.

But, having recently turned 30, his long-running claims of wanting to abandon his old life sound a little more believable this time round, as he opens the first track ‘Alone Again’: “Take off my disguise / I’m living someone else’s life / Suppressing who I was inside.” Meanwhile, on the propulsive ‘Too Late’, Tesfaye sings: “It’s way too late to save our souls, baby / It’s way too late, we’re on our own / I made mistakes, I did you wrong, baby.”

‘After Hours’ stands as The Weeknd’s strongest record in some time, but still there’s a nagging question of what’s to come. Because once you go pop, and then back to your roots, where exactly do you go next? That’s precisely the problem The Weeknd faces with his next effort.