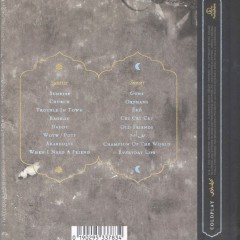 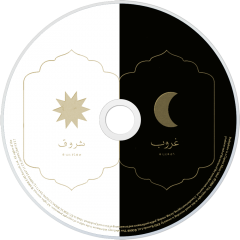 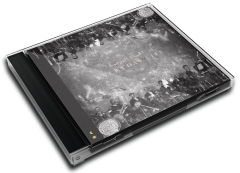 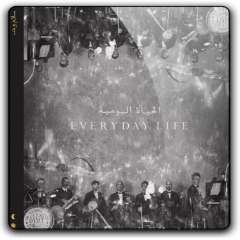 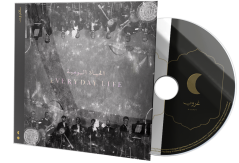 Everyday Life is the eighth studio album by Coldplay, released on 22 November 2019. It is a double album, with the first half titled Sunrise and the other Sunset.

Promotion
On 13 October 2019, black-and-white posters featuring the band teasing the album, and the date "22 November 1919" appeared in various cities around the world, including São Paulo, Berlin, Hong Kong and Sydney. On 19 October, a video teaser featuring the same theme was also released. Two days later, several fans began receiving typewritten notes from the band in the mail.

“ dear friends / my typing isn't very good i'm sorry / I and we hope wherever you are you're ok / for the last 100 years or thereabouts we have been working on a thing called Everyday Life / in the classifieds you might write 'double album for sale, one very careful owner' / one half is called 'sunrise', the other 'sunset' / it comes out 22 november / it is sort of how we feel about things / we send much love to you from hibernation /سلام و حب / chris, jonny, guy and Will Champion, esq. ”
— Coldplay, in a typewritten note to their fans
On 23 October, the track listing was announced by the band in the advertising sections of several newspapers around the world. This included the North Wales Daily Post, where guitarist Jonny Buckland "once had a holiday job".

Live performances
During an online press conference on 1 November, Coldplay announced they would perform Everyday Life in two shows in Amman, Jordan on 22 November, the release date of the album. The first show will showcase the band performing the first half of the album Sunrise at 4:00 a.m. GMT, and the second show will feature the performance of Sunset at 2:00 p.m. GMT. The events, which will be livestreamed on YouTube, will mark the band's first performance in the country. Both performances are being promoted and advertised as YouTube Originals. On 18 November, the band announced a one-off show at the London Natural History Museum on 25 November, with proceeds from the show to be donated to an environmental charity. However, the band announced that they would not play a world tour to promote the album until they had addressed concerns regarding travel and the environmental impact of the shows.

User Album Review
“Every day is great and every day is terrible,” said Chris Martin in a recent interview. “There’s a lot of trouble, but there’s also so much positivity”. The statement was a departure from the Coldplay frontman’s recently optimistic view of the world; the kind of ‘posi-vibes’ electronic pop that characterised much of his band’s last album, 2015’s ‘A Head Full Of Dreams’. In 2019, Martin has acknowledged that the world isn’t always, ahem, “yellow”. It can, in fact, be quite shit.

Step forward Coldplay’s eighth record: a double-album comprised of ‘Sunrise’ (part one) and ‘Sunset’ (part two), which veers frequently between the topical and timeless highs and lows of love, war, racism, faith, gun control, friendship, climate change and police brutality. It’s an unflinching contemplation on the state of the world, armed with some of the band’s most experimental and uncharacteristic music since 2008’s ‘Viva La Vida’.

Opener ‘Sunrise’ sets the tone beautifully with a major/minor string arrangement that could be from a war film soundtrack – not the work of one of the planet’s biggest bands. The lead violin plays an at once mournful and hopeful timbre: a perfect representation of Martin’s note on the duality of good and bad.

What follows is the album’s best track. ‘Church’ is Coldplay 101: a moving, ambient, transcendental piece of pop music. As Martin digs into his usual adventurist metaphors (“When you’re setting your sail / Oh can I be your seventh sea”) his crystalline falsetto is met with swells of strings, cascading guitar arpeggios and avian trip-hop breakbeats. Norah Shaqur, meanwhile, makes for a stunning guest spot singing in Arabic verse. “I worship in your church, baby, always,” may signal the particular spiritual sanctuary afforded to Martin by his lover, but the meeting of Eastern and Western sounds alludes to a globalised acceptance of different religions.

That broad church perspective becomes a common thread of ‘Everyday Life’. The religious opinions of his bandmates Jonny Buckland (guitar), Guy Berryman (bass) and Will Champion (drums) remain unknown, but it’s worth noting that Martin has spoken openly about omnism (treating all religions as equal). And he doesn’t hide from it in ‘Everyday Life’. On the hushed, acoustic folk song ‘WOTW/POTP’ he sings of “a world gone wrong”, where he “shall be strong / […] My faith is strong”.

Elsewhere, on ‘BrokEn’, the band enlists a gospel choir for a stripped-back, finger-clicking piano number (“Oh the Lord will shine a light on me”). ‘When I Need A Friend’ plays out like a modern hymn, with the London Voices Choir accompanying Martin’s sombre chants of “Holy, Holy / Dark defend / Shield and should me”.

Later, on Sunset’s ‘Cry Cry Cry’ Martin references Jizo Bodhisattva, an enlightened being revered primarily in east Asian Buddhism. This loungey rhythm and blues number, which interpolates Garnet Mimms and the Enchanters’ 1963 hit ‘Cry Baby’, is one of the few religious-tinged tracks that has actually has something musically interesting about it. At first, Martin’s pitch-shifted chipmunk wails, partnered with his own raw vocals, appear gratuitous. Somehow, they morph into a catchy doo-wop accompaniment that becomes an endearing listen.

The strengths of ‘Everyday Life’ instead lie in the band’s musical left turns and lyrical experiments. Sunrise’s ‘Trouble In Town’ is a searing indictment of police brutality and systemic racism (“Trouble in town / Because they hung my brother brown / […] Blood on the beat”). A recording of misconduct by US law enforcement precedes a visceral crescendo of ‘A Rush of Blood To The Head’-era piano rock, with Buckland’s reverb guitar signatures clashing with keys and detuned synths.

‘Arabesque’ is another highlight. It’s one of Coldplay’s most atypical songs, with Nigerian brass arrangements blasting over a hulking, psychedelic prog-rock backbone. Three generations of the Kuti family appear on the record – so does Palestinian oud group Le Trio Joubran and Belgian superstar singer Stromae – which makes for a fittingly globetrotting record that espouses unity in the human race (“we share the same blood”).

The song’s accompanying A-side single – and the record’s centrepiece – ‘Orphans’, details hope amid the bleak narrative of the Syrian civil war. It’s the album’s obvious lead single, thrust with a slinky bassline, syncopated Afrobeat percussion and spirited choral sing-a-longs. We’ve had our fill of “woops” and “woo-hoos” across the band’s ‘A Head Full of Dreams’ though. You’re tempted to think: Please, no more.

Thankfully, penultimate track ‘Champion of the World’ (which uses the emotive guitar hook from ‘Los Angeles, Be Kind’, the work of the late Scott Huchison’s Owl John side project) rescues an otherwise trailing part two of ‘Everyday Life’. It’s a slow-burning ballad dedicated to believing in yourself, replete with the widescreen indie rock flair reminiscent of Doves’ ‘There Goes The Fear’. The closing title track, with its blooming strings and repeated chants of “Hallelujah”, sets you up for a ‘Fix You’-style cry fest but slightly short-circuits the whole thing. Still, it’s an interesting decision for a band that trades in build-and-release euphoric pop – and maybe that’s the point.

Ultimately, ‘Everyday Life’ is something of a confounding experiment. On the one hand it’s full of eclectic sounds and ideas – an Iranian poem interlude here (‘Bani Adam’), a country-blues musing on gun control there (‘Guns’) – that offer a welcome respite from Coldplay tropes. True, these songs are sometimes more exciting in theory than in practise (not something you’d have said of, for instance, the Brian Eno-assisted ‘Viva La Vida’), but ‘Everyday Life’ regularly steps to the left-field, proving that Coldplay are more adventurous than they’re often given credit for.