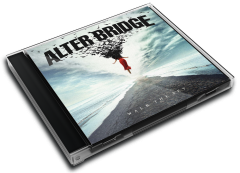 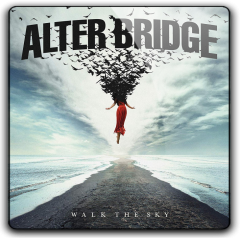 "Walk the Sky" is the sixth studio album by American rock band Alter Bridge, released on October 18, 2019 on the Napalm Records label. It was produced by their longtime collaborator Michael Baskette, who has produced all of the band's albums since Blackbird.

Album Review
For over fifteen years, Alter Bridge have blurred the lines between Hard Rock and Heavy Metal, creating a unique space all of their own. If the band’s last studio album, 2016’s ‘The Last Hero’, tipped closer to Hard Rock, their refreshing new opus ‘Walk The Sky’ walks a finer tightrope, balanced precariously between a rock and the bands heavier side. If some would have delighted in another fourteen song album of more quintessential Alter Bridge, others yearned for a stirring of the pot. Well, with ‘Walk The Sky’, their sixth studio effort, the pot does indeed get stirred, producing some thrilling results.
Although you wouldn’t have guessed it based on the record’s leading singles. “Wouldn’t You Rather”, with its spitfire delivery and heavy instrumentation, so dense it’s almost impenetrable, made for a curious first offering by suggesting an entirely heavier direction. Indeed, the semi symphonic metal “Pay No Mind,” and the crushing “Take The Crown,” would also suggest Alter Bridge have simply swung to the other side of the pendulum, gearing up to deliver a heavier ‘The Last Hero.’ That is until in the brilliant, epic, and stunning anthem that is “Godspeed”.
To critique “Godspeed” with anything other than unconditional commendation would be inexcusable. From its initial, imminently addictive opening piano/synth hook, to its explosive main riff and emotive verses, by the time Myles Kennedy delivers the ascending pre-chorus before launching you into a chorus too good not to adore, “Godspeed” has comfortably established itself as the albums best track. In fact, it holds its own among the bands best across their entire catalog. It is simply that good.
If suspicions were beginning to brew that Alter Bridge had become a formulaic outfit, these speculations meet their end with this synth-based, modern rock classic that explores some new and exciting heavier territories for the band. Ambitious, adventurous and unmistakably alive, ‘Walk The Sky’ might well redefine what quintessential Alter Bridge sounds like.
Reviewed by Carl O'Rourke for metalwani.com.