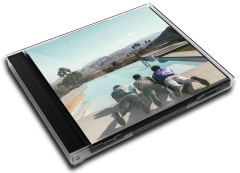 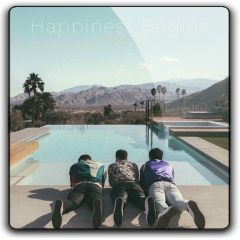 Happiness Begins is the fifth studio album by the Jonas Brothers, released on June 7, 2019. It is their first album since 2013's Live, and first studio album since 2009's Lines, Vines and Trying Times. It was preceded by their comeback single "Sucker" as well as "Cool".

Background
In writing and recording for the album, the brothers said that they wanted a "new and improved sound" with "feel-good tracks", so their A&R at Republic Records, Wendy Goldstein, got in contact with Ryan Tedder, Greg Kurstin and Justin Tranter to help compose and produce songs for them. Tedder stated that they would "write a song in about 90 minutes, cut it in the second hour. It would be demo'd by dinner." Billboard described the resulting sound as containing "hints of everything from '80s new wave to reggae to country", and also said that "Nick describes 'Hesitate' as Joe's love letter to Turner, while 'I Believe' is a synth-heavy slow jam that alludes to his own whirlwind romance with Chopra".

Promotion
The band announced the album in a Twitter post on April 22, 2019, sharing the cover art and release date. The brothers then separately shared the news, with Kevin stating that he was "most proud" of the album.

On April 30, the band posted teasers to social media with "Happiness Begins tomorrow". The next day, the band officially announced the Happiness Begins Tour, which is set to begin on August 7, 2019. The tour will play 40 shows in North America.