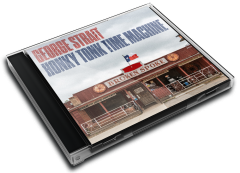 "Honky Tonk Time Machine" is the thirtieth studio album by American country music artist George Strait. It was released on March 29, 2019, via MCA Nashville.
Eight of the album’s 13 tracks were co-written by Strait, who teamed with trusted sidekicks including his son, Bubba, and Dean Dillon, the man behind so many Strait gems including “The Chair,” and “Ocean From Property.”

Album Review
Following up on his 2015 Cold Beer Conversation LP, Strait sticks pretty close to that record’s winning formula, which is a similar horse he’s successfully ridden for many decades now.
Although there’s a range of slow, medium and quick tempo tunes here, the album excels when it’s either twisting and twirling in full-speed, or gently waltzing in a far lower gear. “Every Little Honky Tonk Bar” is a revved-up fiddle-fiddle-intensive jam outfitted with soaring ribbons of pedal steel that would’ve dominated late-‘90s radio in the same way “Blue Clear Sky” did in 1996. The contemplative stunner “God and Country Music,” in just about anyone else’s hands would be a ham-fisted thwack to the head, but with Strait’s believable guidance, it’s a relatable, heart-gripping take on the classic “Saturday night sin, Sunday morning salvation” theme country music has long built its foundation upon.
The album concludes with the sort of 1-2 punch combo only a giant of Strait’s stature could land. “What Goes Up” is a tender nod to the power of prayer, followed by the album-closing “Sing With Willie,” a hell-raising sing-along that is–shockingly–Strait and Willie Nelson’s first-ever duet. Considering Strait has recorded with Sinatra and Willie has sung with just about everyone else on Earth, it’s nice to have this fitting tune to add to the canon.
All in all, Honky Tonk Time Machine is another solid-gold reminder that George Strait is the kind of leader we desire, but likely don’t deserve. Long live the King!.
Reviewed by Kelly Dearmore for soundslikenashville.com.