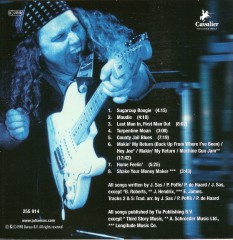 Live was Julian Sas’s third record and his first live album. It includes ‘Hey Joe’, ‘Machine Gun Jam’ as well as Julian’s take on Muddy Water’s ‘County Jail Blues. It was recorded at ‘t Vervolg Beverwijk (The Netherlands) on February 20, 1998, and full of honest gutsy music with no needs for overdubs or any other studio gimmickry.

Album Review
“When performing live, Julian Sas and his band sometimes blast out a Hendrix song like Hey Joe or Machine Gun. And I have to say that Julian is about the only one who gets away with it.”