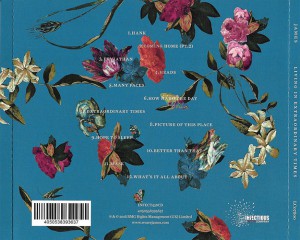 Living in Extraordinary Times is the 15th studio album by British rock band James. It was released on 3 August 2018, through Infectious Music. A few months after the release of the band's 14th studio album, Girl at the End of the World in 2016, work began on a new album. Writing and three weeks of jam sessions followed, with engineer Beni Giles appearing partway through the sessions. Recording took place at Livingston and Iguana studios, both of which are in London, and lasted for four weeks, with Giles and Charlie Andrew handling co-production. Described as an indie rock record with elements of electronica, the album drew comparisons with the music of U2, the Killers, and the Courteeners. The music incorporates grooves, which were aided by bassist Jim Glennie, drummer David Baynton-Power, Andrew, and Giles.