11) Dancing with Our Hands Tied

13) This Is Why We Can't Have Nice Things 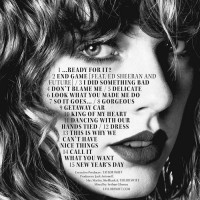 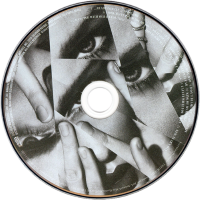 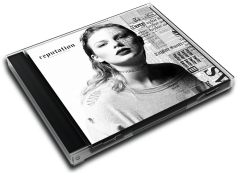 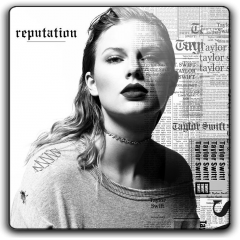 "Reputation" is the sixth studio album by American singer-songwriter Taylor Swift. It was released on November 10, 2017, through Big Machine Records. The album was primarily produced by Jack Antonoff, Max Martin, Shellback and Swift herself, who also serves as the executive producer. Guest features include English singer-songwriter Ed Sheeran and American rapper Future.
At Metacritic, which assigns a normalized rating out of 100 to reviews from critics, the album received an average score of 75, based on 16 reviews, indicating "generally favorable reviews".

User Album Review
Swift doesn't switch into ballad mode much on Reputation, which is a real shame – if you're a fan of her epic weepers like "All Too Well" or "Clean" or "Last Kiss," you might picture her acoustic guitar sitting alone in the corner, impatiently clearing its throat. But she saves up her ballad mojo for the killer finale "New Year's Day," which continues her streak of ending each album with a sinus-exploding mess of a tearjerker. It's the quietest moment on Reputation, yet the most powerful – she wakes up after a glam New Year's bash ("Glitter on the floor after the party/Girls carrying their shoes down in the lobby") and reflects on what she has left to call her own, which is the not-so-glam partner she'll be spending this not-so-glam day with. It's a tiny moment between two people, a moment the rest of the world will never notice. And all over Reputation, Swift makes those moments sound colossal, the way only she can.
Reviewed by rollingstone.com.