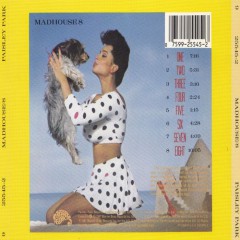 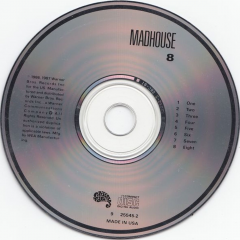 8 is the first studio album by Madhouse, and was released in January 1987.

All eight tracks were written or co-written by Prince, and all contain him playing most instruments, with Eric Leeds playing saxophone and flute. All tracks are given written numerical names, from One to Eight, while the album is named numerically. The album is the first instrumental album released by Prince under any name.

Album Review
Recorded in less than five days in the fall of 1986, 8 was Prince's first foray into jazz fusion, a natural progression from the sophisticated, horn-spiked funk of Parade. As with his numerous other side projects, like the Time and early Sheila E., Prince took pains to disguise his involvement, making woodwind player Eric Leeds the spokesman for Madhouse. In fact, Prince wrote and laid down all eight tracks before calling on Leeds -- who was reportedly being rewarded for his loyalty -- to add overdubs on sax and flute. The results, titled only by number, are more impressive when considered in light of how many other musical balls Prince had in the air at the time: Sheila E.'s third effort, the beginnings of The Black Album, and his own epic Dream Factory (which would later mutate into the two-disc Sign o' the Times), among others. But on their own merits, the songs aren't bad, either, with the instrumental format offering Prince and Leeds a chance to indulge in more complex melodic and harmonic ideas than often appeared on record. In that sense, 8 has more in common with the Revolution's legendary live shows of this period, which often featured such extended jams. The best song, however, is the simple single "6," a throwback to the foot-stomping '60s soul-jazz of artists like Grant Green, updated with an explosive '80s backbeat. Not an essential item in the Prince canon, this is still miles ahead of the sort of fuzak Kenny G. and Najee (who would end up in Prince's band, years later) were taking straight to the bank at about the same time.