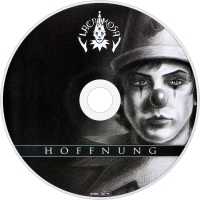 "Hoffnung" (Hope) is the 12th studio album of Lacrimosa , released on 6 November 2015 on the Hall of Sermon label .
Hall of Sermon released two editions: The standard edition and deluxe edition, which includes an extra song (Keine Schatten mehr - Jubiläums Version) and the DVD "Live in Mexico City" recorded in Mexico City on April 13, 2013 in the BlackBerry auditorium during the Revolution tour.