Splinter: Songs From a Broken Mind 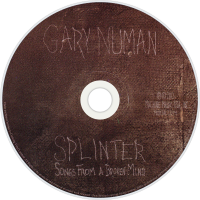 "Splinter (Songs from a Broken Mind)" is the twentieth studio album by English musician Gary Numan, released on 9 October 2013 by Mortal Records and Cooking Vinyl. The album debuted at number twenty on the UK Albums Chart on sales of 6,187 copies, becoming Numan's highest-charting album since 1983's Warriors.
Splinter (Songs from a Broken Mind)" received generally positive reviews from critics. At Metacritic, which assigns a normalized rating out of 100 to reviews from mainstream critics, the album has an average score of 79 out of 100, which indicates "generally favorable reviews" based on 15 reviews.
The 20th studio release for the British electronic artist features guitarist Robin Finck and was produced with Ade Fenton.

Album Review
This is the sort of inspiration that only seems to hit him when he's going through a rough patch. Nice for his fans, but a little unfortunate for him. Pure, the album that was seen as his real comeback (even spawning a top 40 single!), was mostly inspired by the loss of an unborn child and a dog. Even when he was in the doldrums of the mid-80s, the unexpected death of Tubeway Army bassist Paul Gardiner led him to write 'A Child With the Ghost', one of his greatest songs ever. This time Numan struggled with depression in the past few years (which nearly broke up his marriage). This all comes through in the lyrics, which are mostly good (one particularly haunting line: "I don't believe in the goodness of people like me"), even if they lay it on a little thick sometimes. Still, it provides a pretty good idea of what's on Numan's mind - 'My Last Day' is Numan reflecting upon just that, the sort of depressing thought that inspired him to subtitle the album "Songs From a Broken Mind". He's telling the truth - that mind was apparently too broken to even write songs for a good while, hence the long wait. That such a period resulted in arguably his best album in about three decades is just another odd twist in a career that's been nothing but.
Reviewed by Nick Reed for thequietus.com.