Last of Our Kind 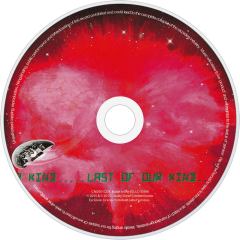 Last of Our Kind is the fourth studio album by British hard rock band The Darkness. Produced by the band's guitarist Dan Hawkins at his studio The Hawks Nest in Norfolk, it was first released on 27 May 2015 in Japan, and later in other territories, by Canary Dwarf Records. The album is the first and only by the band to feature drummer Emily Dolan Davies, who replaced Ed Graham in 2014 before leaving less than a year later. The album was promoted via PledgeMusic, with the band offering signed copies of the album on both CD and vinyl, as well as signed guitars, handwritten lyric sheets and setlists from the band's archive.

Last of Our Kind was entirely written in Ireland, then produced by guitarist Dan Hawkins at his own recording studio, Leeders Farm, in Norfolk. Around fifteen songs were in contention for the final tracklisting; ten appear on the standard release; with the Japanese and Best Buy releases containing two exclusive bonus tracks; while another, "Million Dollar Strong", was played live during their warm-up tour of Ireland in March 2015. A special edition of the album is expected to be released in September, containing five bonus tracks, as well as a DVD of a live performance from prior to the album's release.

The first song revealed from the album was "Barbarian", which was released on 23 February at the same time as the album's official announcement. "Barbarian" was released as the first promotional single on March 8, 2015. A PledgeMusic page was set up to promote the album before release. The release of Last of Our Kind will be preceded by a tour of Ireland in March 2015. The second promotional single from the album, "Open Fire", premiered on 23 March, followed by an official chart release on May 25, 2015.