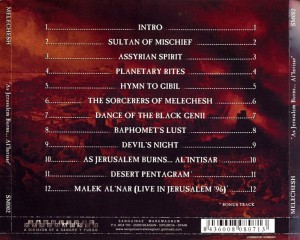 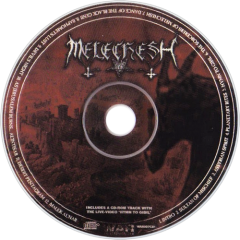 "As Jerusalem Burns...Al’Intisar" is the1996 debut full length studio album by Melechesh originally released on the Breath Of Night Records label. Played in a black metal style as opposed to the more Assyrian-inspired later work, the word Al’Intisar means 'the victory' in Arabic. The album contains all five songs from the original demo As Jerusalem Burns... re-recorded along with five new tracks recorded in the winter of 1996. The lyrics are not reprinted in the album booklet.
The album has had three re-issues: in 2002, 2004 and 2005. The first by War is Imminent Productions featured modified artwork, two bonus tracks and a video clip. Spanish label GOI Music released the second and Russia’s Nordic Music released the third for the eastern European market.