Track List
01) Whispers From the Tower
02) Genies, Sorcerers and Mesopotamian Nights
03) A Summoning of Ifrit and Genii
04) Wardjinn
05) Rub the Lantern
06) Covering the Sun
07) Kurnugi's Reign
08) Oasis of Molten Gold
09) Dragon's Legacy
10) The Siege of Lachish 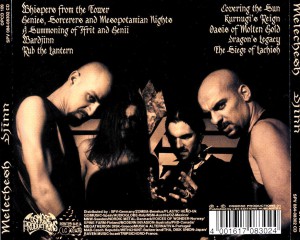 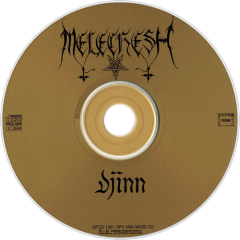 "Djinn" is the second full length studio album by the black metal band Melechesh, released June 26, 2001, and their first on the Osmose Productions label. A video for Genies, Sorcerers and Mesopotamian Nights was made, using an abridged version. Also note that the song "The Siege of Lachish" is actually 6 minutes and 21 seconds long; after an extended period of silence, a Mesopotamian chant played in reverse starts at 9:32.
The CD re-issue by Osmose Productions in 2010 includes the six tracks of the Djinn Demo from 1998.