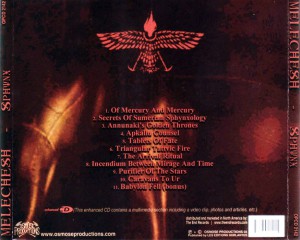 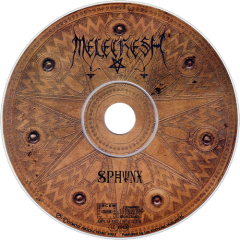 "Sphynx" is the third full length studio album by the black metal band Melechesh, released March 24, 2003 on the Osmose Productions label. The album presents the band's Mesopotamian/Sumerian metal in a more aggressive and intricate manner. The CD version includes an enhanced multimedia section featuring a trip to the world of Melechesh (lyrical overviews, wallpaper, photos, glossary of terms, and a videoclip for the track "Genies, Sorcerers and Mesopotamian Nights"). There is a guest appearance from Andy LaRocque on the track "Purifier of the Stars".
The Limited LP version contains a cover of Celtic Frost's "Babylon Fell".