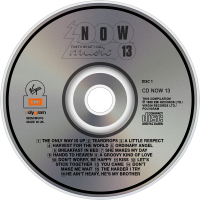 Now That's What I Call Music XIII or Now 13 was released in 1988. The album is the 13th edition of the (UK) Now series. It was released on vinyl, audio cassette & CD formats. It reached number 1 on the UK Albums Chart for four weeks. This would be the last compilation album to be number 1 on the chart, as the UK Compilation Chart was created in January 1989 due to the dominance of compilations in the albums chart over the previous few years, and subsequent Now! albums would chart there instead.

Now 13 features three songs which reached number one on the UK Singles Chart: "The Only Way Is Up", "A Groovy Kind of Love" and "He Ain't Heavy, He's My Brother".

Now 13 is one of only two Now! albums to feature Roman numerals in the title as opposed to numbers, Now 2 being the other.