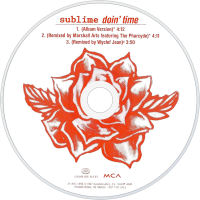 "Doin' Time" is a single by the American band Sublime. It is featured on their self-titled third album. The lyrics tell of a cheating girlfriend, whose infidelities and poor treatment of her lover makes him feel like he is in prison. It was released as a single on November 25, 1997; the disk contained alternate versions of the song by Wyclef Jean and The Pharcyde. Additional versions appeared on the post-Bradley Nowell compilation album Second-hand Smoke and several bootlegs, including one with Snoop Dogg. The song is also featured on the soundtrack to the video games Dave Mirra Freestyle BMX 2 and Major League Baseball 2K7 (although it is renamed "Summertime" on the latter).