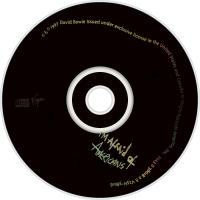 "I'm Afraid of Americans" is a single by David Bowie from the 1997 album Earthling. The song, co-written by Bowie and Brian Eno, was originally written during Bowie's studio sessions for the 1995 album Outside but was not released until a rough mix appeared on the soundtrack to the film Showgirls, and was subsequently remade for Earthling.