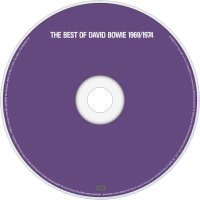 Diving into a new David Bowie collection is all about comfort. The listener should land somewhere between the reliable pool of radio staples like "Golden Years," "Suffragette City," and "Let's Dance" and the deep water of fan favorites like "TVC 15" and "Look Back in Anger." EMI's three-disc Platinum Collection does an awfully good job of placating fans of both reservoirs, focusing on the Thin White Duke's mercurial 1969-1987 offerings. Each disc covers an era -- 1969-1974, 1974-1979, and 1980-1987 -- allowing time for both classics ("Starman") and obscurities ("Velvet Goldmine"). The Platinum Collection gets high marks for the inclusion of oft-overlooked gems such as "All the Young Dudes" and "Wild Is the Wind," but it's the appearance of soundtrack nuggets like "When the Wind Blows," from the animated nuclear war fable of the same name, "Underground" from Labyrinth, and "Drowned Girl" from the play Baal that sets this anthology apart from others.