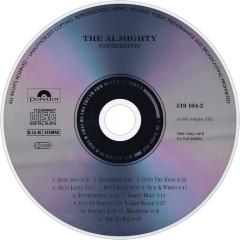 Powertrippin' is the third studio album by Scottish heavy metal band The Almighty. It was released in the United Kingdom in 1993 by Polydor Records and was the band's final studio album for that label. It was the band's first album to feature guitarist Pete Friesen, who replaced founding guitarist Tantrum. Friesen contributed to the songwriting and was a major part of the new sound presented on this album, introducing a heavier, riff-based grunge sound compared to the punk leanings of earlier efforts. The subject of the cover art is taken from the artwork ''Jet Age Man by Ralph Morse, which featured on the cover of Life magazine in December 1954.

Three singles were released from the album in multiple formats in 1993. "Addiction" (CD, 12" vinyl), "Out of Season" (2-CD, 7" vinyl & 12" vinyl) and "Over the Edge" (CD, cassette, 12" & 7" vinyl). The album was re-released in the United Kingdom and later in Japan with a bonus disc which contained a live show from August 22, 1992 at Donington Park. An EP that was released in Japan only includes four live track from the band's 1993 European tour supporting Iron Maiden. The EP, called "Liveblood", also has two studio tracks, "Fuckin' Up" a Neil Young cover and “In a Rut” a cover of the Ruts song. These studio tracks were put out on the "Out of Season" singles.