Now That's What I Call Music 9 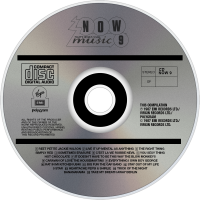 Now That's What I Call Music 9 or Now 9 was released in 1987. The album is the ninth edition of the Now! series in the United Kingdom and reached number one on the UK Albums Chart for five weeks. Like the previous volume, it was given a single CD release which featured a selection of tracks available on the full vinyl/cassette release. All subsequent releases from Now 10 would have a full double CD release with all tracks included.

Now 9 features seven songs which reached number one on the UK Singles Chart: "Reet Petite", "Caravan of Love", "Everything I Own", "Take My Breath Away", "Stand by Me", "Jack Your Body" and "The Final Countdown".